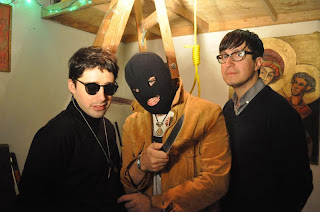 The Beets, of Jackson Heights, Queens, sound like the emotional singalongs you and your friends had in college, if you and your friends had been musical geniuses reinventing 1960s garage rock with poppy no-fi tracks. Their songs are short and catchy and packed with emotive, poetic lyrics, more inspired by the Beatles and the Ramones than the current indie scene. Their shows are more like parties, complete with strings of lights adorning the stage, and they have more presence than you can handle.

The Beets are the brainchild of frontman Juan Wauters, who immigrated from Uruguay to Jackson Heights, where he met Jose Garcia, his best friend and fellow band member. The pair has been making music at a feverish pace for half a decade, and that hard work has paid off. Because theyʼve been playing together for so long, Wauters and Garcia have an impeccable feel for each other, allowing them to perform beautifully impulsive, spontaneous shows. The accessibility of their sound and the authenticity of their aesthetic make The Beets a prime candidate for a breakout, though their focus remains on simply enjoying making art together.

Their first album, Spit in the Face of People Who Donʼt Want to be Cool, is immaculate. And their second LP, Stay Home, is out now on Captured Tracks. As the cover art tells us, it's "a collection of 13 new songs about staying home."