Reviewed! Plain White T's - "The Wonders of the Younger" 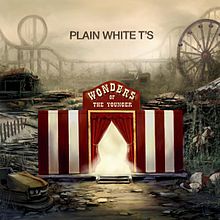 “The Wonders of the Younger”
Hollywood

Believe it or not, “the Wonders of the Younger,” the latest release from the moderately relevant Plain White T’s, is a rock opera. You wouldn’t think that the Plain White T’s would be a band ambitious enough to attempt the concept of all concept albums, but apparently the band is ready to write their place in history alongside bands like the Who and Green Day, bands who have not only attempted the vaunted rock opera idea, but have also overwhelmingly succeeded. Well Plain White T’s, yes, kudos for trying, but you’re not on the same level as those two afore mentioned bands quite yet.

For the most part, “the Wonders of the Younger” is Plain White T’s attempting to sound epic, grandiose and over-the-top, though they never quite achieve this sound completely. But for all the generically bad stuff there is here, there is a fair share of good material as well. First off, this album shows that the T’s are willing to step outside the box, unafraid to try something new, which is something that has really plagued them for years. ‘Irrational Anthem’ opens “the Wonders of the Younger” in a zestful fashion, before ‘Boomerang’ adds a delightful hook full of vocalist Tom Higgenson’s delicate falsetto, adding a light, playfulness to the work, a playfulness that continues to the effervescent ‘Rhythm of Love.’ The bands attempt to emulate My Chemical Romance circa “the Black Parade” misses wide of the mark on ‘Killer,’ and tracks like ‘Map of the World’ and ‘Last Breath’ seem fairly lost, which is something that can be said for more than a few cuts off this record. ‘Cirque Dans La Rue’ is noteworthy, a track that exudes nothing but fun and good times, albeit a tad on the creepy side, that borrows a page from the exclamation point era Panic! At the Disco and debut “A Fever You Can’t Sweat Out.”

It sounds as if the band wasn’t completely able to grasp the concept fully from a stylistic standpoint, which is evident when listening to most of the songs presented here, since they don’t seem much different from the bands normal mainstream pop-rock way of doing things. But the best thing about “the Wonders of the Younger” might just be what it isn’t, and not what it is. What it isn’t is 2008’s “Big Bad World,” which is a good thing for the T’s because another flat album full of songs looking to rediscover whatever it is the band possessed before ‘Hey There Delilah’ hit the airwaves might have just killed the bands overall relevance entirely.

Unfortunately for the Plain White T’s, aside from the concepts and bells and whistles, and no matter how they try to repackage themselves with “the Wonders of the Younger,” the fact remains that this is still a Plain White T’s album. This shouldn’t have succeeded, and it didn’t, but in the long run, though this effort was far from perfect, it still shows progress, and still shows there might be light at the end of the tunnel for a band still trying to dig themselves out of the their self-induced ‘Hey There Delilah’ dug hole.