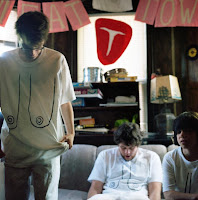 But Screaming Females' success did not come overnight: it came after four years of playing over 300 self-booked shows at nontraditional show spaces, sleeping on floors around the country, self-releasing their first two albums, and breathing new life into the New Brunswick, New Jersey DIY basement show circuit. And on their September 2010 LP, Castle Talk, the trio proves their abilities as more than just a pint-sized guitar shredder. Castle Talk showcases their growth together as a unit, as a band, with some of their most complex and confident songwriting to date.

"Power Move was the first record that a lot of people had heard by us, and after that came out a lot of people had the same reaction, that Marissa is a woman who can play guitar solos," says drummer Jarrett Dougherty. "But we are more than just that simplistic observation and I think this record shows that."

The Screaming Females story starts in New Brunswick in 2005, with Marissa on guitar and vocals, Jarrett on drums, and King Mike on bass. With no all-ages venues in town, the band met their biggest obstacle at the start: finding places to play. But the solution (if there is no venue to play, create your own show space in your basement) was the driving force behind the DIY work ethic that would eventually propel the band forward; the grassroots approach born out of necessity in New Brunswick ultimately Screaming Females developed into a mindset that the band now prides itself on. In 2006, the band self-released Baby Teeth, followed by a second self-release in 2007, What If Someone Is Watching Their TV? Simultaneously, learning from trial and error, plus inspiration from reading Our Band Could Be Your Life, the band booked hundreds of shows in DIY spaces, houses, cafes, and side-of-road co-ops. Power Move was Screaming Females' first full-length with any label (or any outside help, really), released by New Brunswick label Don Giovanni Records. The label mirrors the band's values, champions their hometown, and most importantly, is run by their friends.

In 2010, the band has continued their non-stop touring, including a February tour with Jeff the Brotherhood, two tours with fellow Jersey punk Ted Leo and his band the Pharmacists, a national headlining tour, and a spot on the Village Voice's annual Siren Fest. The band says that thus far the highlight of 2010 was the sold out Don Giovanni Records showcase in February at Bowery Ballroom, which filled one of New York City's biggest venues with the energy of a New Brunswick basement show. Like Power Move, Castle Talk was recorded at the Hunt Studio in New Jersey with engineer, Eric Bennet, but with a new approach to writing and recording. The record was released September 14th via Don Giovanni.