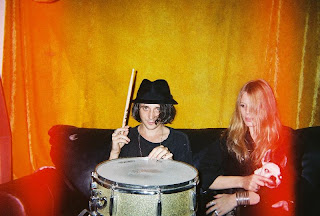 In April of 2010 Captured Tracks released a 7" single by an unknown new york band called MINKS. On the date of release, few people knew any information about the musicians behind the music. Most writers and listeners assumed that it was a one man bedroom music project, like many other artists on the label, and were confused even more when six musicians appeared on stage to perform songs at the first MINKS concert. The first single, titled "Funeral Song" was quickly praised by music journalists and publications like Pitchfork, Stereogum, and Fader. Fader said that it sounded like "If Robert Smith gave birth to a baby, and the baby was actually a cassette of Cure demos that had a lot more staying power than actual Cure demos."

Seasons changed, and MINKS returned with a follow up 7" single titled "Ophelia," which continued to shadow people's minds with curious thoughts and open ears. The uniqueness of these early singles showed the ability to balance the feelings of joy and sadness, as well as a door to past and present worlds. For these songs were less about the songs themselves, but the ability to make you feel a certain emotion when listening to them. No element alone would stand out, but as a whole, the swirling waves of sound which Pitchfork would describe as "all texture and drift," would drive you away to a nostalgic place in your mind.

With the release of By The Hedge, MINKS further the ability to make you feel eternal autumn. Frontman and songwriter Sean Kilfoyle's ability to capture the raincoat grey Boston mornings of his youth, have the desire to make you feel like you are listening to a dream while awake and standing in the pouring rain. put on your raincoat and enjoy the splendor.

MINKS will release "By The Hedge" via Captured Tracks January 11, 2011.