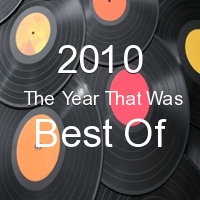 Though 2010 saw a number of good releases from bands all across the musical spectrum, but in the end, it boiled down to a two horse race essentially between the Deftones and their career-defining masterpiece Diamond Eyes and Filter’s career-saving, comeback opus the Trouble with Angels. Both have their strong points, and while neither have many weak points, Diamond Eyes takes the cake. Though the Deftones slot in as Getexposedmusic’s 2010 Album of the Year with Diamond Eyes, keep in mind that Filter and the Trouble with Angels isn’t far behind.

Here is my full list of Top Albums of 2010, well in no particular order besides the Deftones and Filter at the top.

GeteXposedmusic’s 2010 Album of the Year

Deftones – Diamond Eyes (Warner/Reprise): To be honest, Diamond Eyes wasn’t expected to be great. In fact, many expected it to be good, maybe more middling, and far from what it was - epic and career-defining. It’s hard to imagine that a band, having endured the trials and tribulations of longtime bassist Chi Cheng lapsing into a coma, would be able to top their prior acclaimed material (see Around the Fur, Adrenaline), but Diamond Eyes did, and then some. The record offers most everything one would want out of a great Deftones release. On one hand you get that trademark Deftones angst-ridden heaviness, led by Chino Moreno’s staggering vocal onslaught (‘Rocket Skates’), then on the other hand, the record presents an ambitious, Cure-esque side, compounded with heady atmospherics and adventurous dense sounds that, when combined, put the Deftones on a new plateau of greatness (‘Diamond Eyes,’ ‘You’ve Seen the Butcher’). If you haven’t taken the time to experience this record, shame on you, but hey, it’s never too late.
Grade: A
Listen to: ‘Rocket Skates’

#2 Album of the Year with a Bullet
Filter – the Trouble with Angels (Rocket Science): From the onset of the Trouble with Angels, the fifth studio release in fifteen years from Filter, the band returns to a sound perhaps long forgotten, one that blends towering drums, churning, down-tuned guitars and chugging riffing, a sound that some fans of the band might not remember. Those fans whose interest has waned in the band throughout the years due in large part to soft, pillow-y radio mainstays like ‘Take a Picture’ should perk up and heed the call of the opening few stages of the record, outings like ‘the Inevitable Relapse,’ ‘Drug Boy’ and ‘Absentee Father’ that sound closer to Short Bus era Filter circa 1995 than most anything else they’ve released, though as is the case of most all great rock records, it isn’t quite so one dimensional in terms of sound. To say that the Trouble with Angels is an overwhelmingly pleasant surprise wouldn’t so much be an understatement. And to that point, to say that this is one of the bands strongest contributions thus far in their career might not be that much an understatement either.
Grade: A
Listen to: ‘Drug Boy’

File Under: Indie Alt-Alt-Pop
April Smith & the Great Picture Show - Songs for a Sinking Ship (Little Roscoe): Throughout Songs for a Sinking Ship, there is a certain air of cool, a measure of confident swagger, which lingers about like freshly sprayed Febreeze; you can feel it surrounding you. You know it’s there, and you can’t help but pay attention to it. April Smith’s voice is the true centerpiece, and this record is not shy about that fact. Smith has the ability to soulfully croon one moment (‘Drop Dead Gorgeous,’ ‘Dixie Boy’), then emote in a devastatingly heartbreaking fashion (‘What I’ll Do,’ ‘Beloved’), all while not forgetting how to swing and bounce between all things ragtime and vaudeville (‘Colors,’ ‘Wow & Flutter’). Songs for a Sinking Ship is a stunning example that you don’t have to sound like everyone else to be successful; you just have to be yourself.
Grade: A
Listen to: ‘Beloved’

File Under: Indie/Alt-Pop/New Wave Euphoria
Queens Club – Young Giant (Tooth & Nail): Queens Club is a band that may house former members of the Chariot, but the two bands could not be further apart musically. Case in point, take the bands full length debut for Tooth and Nail, Young Giant. This is a stunning affair, a record that ultimately sounds fresh and inviting, with a forward leaning tilt. Although a good portion of this disc is full of textured new wave brevity ala Kasabian or the Bravery (‘Nightmarer,’ ‘Family Ties,’ ‘Cutt Me Off’), Queens Club mix things up from time to time, tossing in alt-pop tracks with a deep rock-soaked bounce (‘Dust,’ ‘Upstart’), and rich, electronic flourishes sure to make sweat drip and bodies writhe on the dance floor (‘Danger Kids’). One thing is for sure, Queens Club is sure to cause a stir with Young Giant.
Grade: A
Listen to: ‘Dust’

File Under: Hard Rock
Godsmack – the Oracle (Universal Republic): The Oracle marks the bands re-ascension to the top of the modern hard rock throne, though they never really left, they were always just sort of milling about. The record also marks a staunch return to form musically following the bands experimental soirée into Southern rock on their last disc, 2006’s IV. In what is arguably the bands best work since Awake, and perhaps their most forceful release since their debut, the Oracle does not disappoint and is one of the best rock records of 2010, and with all of the tremendous records bands that have tossed their hat into the ring with new releases (Deftones, Sevendust, A New Revolution), that’s surely saying something.
Grade: A
Listen to: ‘War and Peace’

File Under: Metal Album of the Year
As I Lay Dying - The Powerless Rise (Metal Blade): The Powerless Rise is a brutally stunning affair, a record that is truly as powerful as it is abrasive, and throughout it As I Lay Dying never fail to bring their unique epic feel to the table. Each song sounds somehow bigger than the last, something the band has actually become quite adept at over the years. ‘The only constant is change,’ Lambesis sings on the song of the same name – too bad he doesn’t heed his own words because the Powerless Rise is like most other AILD work – spectacular and near infallible - and with this record AILD stay consistent and at the top of their game, among the highest echelon of heavy bands in the scene today.
Grade: A
Listen to: ‘Parallels’

File Under: Goth-Tinged Hard Rock
We Are the Fallen – Tear the World Down (Universal Republic): Tear the World Down is an emphatic statement. It is a sheer force, a tidal wave of sound that will completely engulf you. Ben Moody got the old team back together in guitarist John LeCompt and drummer Rocky Gray and replaced the once-thought irrevocable Amy Lee with the baroque voice that is Carly Smithson. It is near impossible to not be affected by this record, or moved in some fashion. Its heavy sound takes melodic hard rock and alters it with ethereal atmospherics and a gothic tinge, a sound you aren’t hearing much of today. The ballads are both immaculate and exceedingly powerful (‘Sleep Well My Angel,’ ‘I Will Stay,’ ‘I Am Only One’), literally jumping off the record at you, leaving an unshakeable lasting feel in their wake. Tear the World Down can surely bring the heavy as well - look no further than songs ‘Burn,’ ‘Through Hell’ and the brilliant ‘St. John’ (a song which probably won’t, but should, garner song of the year clamors). Tear the World Down is above and beyond the real deal, a record that should immediately be heralded as one of the years finest.
Grade: A
Listen to: ‘St. John’

File Under: Modern Pop Rock with a 60’s Tilt
Jukebox the Ghost – Everything Under the Sun (Yep Roc): Delightfully animated and wonderfully energetic are just two high praises that could be bestowed upon Everything Under the Sun, just the sophomore release from Washington, DC’s fresh-faced pop rockers Jukebox the Ghost. This record is full of life from bell to bell, one completely full of pop gems in the making, ready for you to excavate them, with your ears. These songs are sunny, vibrant and precisely delivered, something the band must have really spent some time and focus on since their 2008 debut Let Live and Let Ghosts. The arrangements are beautiful, as the band dispense one striking pop structure after another, showcasing their fantastic sensibilities through vessels like ‘Half Crazy,’ ‘Summer Sun’ and ‘the Sun,’ before offering a break from all the sunshine and effervescence in the way of the ballad ‘So Let Us Create,’ a track that surely borders on shoe-gazing. But despite all the albums positive assets, its greatest strength may be the fact that once the last track (‘Nobody’) concludes, you as a listener are left wanting oh so much more.
Grade: A
Listen to: ‘The Stars’

File Under: Dreamy Indie Pop
Le Futur Pompiste – Le Futur Pompiste (Shelflife): Le Futur Pompiste’s long-awaited sophomore eponymous record is much easier to digest than it is to pronounce (yeah, it’s self-titled but still a mouthful), which is definitely a good thing. While it’s not quite Siouxsie & the Banshees (think more Stereolab), this self-titled work is deliciously layered, bafflingly beautiful, lush and effervescent. The music is vibrant and aware, and for those who may have thought that this band would have to knock the rust off due to the discs long gestation period, think again. Its late-60’s dreamy indie pop is an engulfing affair, painting colorful, multihued landscapes every chance it gets with bright, sun-drenched outings like ‘Five Hundred Heartbeats,’ ‘My Trophy,’ and ‘Hunter.’ The band also saves one of its best for last in the artful closer ‘Girls of These Days,’ an opus to cap the already stunning affair. If Le Futur Pompiste serves as your introduction to the band, then you’re surely in good hands - this is the best place to start.
Grade: A
Listen to: ‘Communication’
Email Post
Labels: april smith and the great picture show as i lay dying damn this desert air deftones filter godsmack jukebox the ghost le fetur pompiste queens club we are the fallen