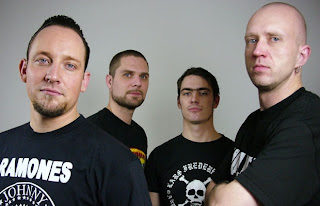 ALBUM WILL BE AVAILABLE WITH PHYSICAL RELEASE DECEMBER 14

Danish metal quartet Volbeat will release their major label debut BEYOND HELL / ABOVE HEAVEN digitally on November 9th via Universal Republic in the U.S. A physical release will follow on December 14, 2010. Overseas, the album debuted at number one on the sales charts in Denmark, Finland and Sweden, and Top 10 in a half dozen additional countries. Since release, the album has sold over 200,000 copies. Sirius XM format manager and on-air personality Jose Mangin exclaimed, “Finally a metallic blast of unique and powerful music from across the pond that everyone can agree on!”

Since the Danish metal quartet’s formation in October, 2001, VOLBEAT has steadily risen to become one of the major attractions in the European scene. This success has followed in the U.S., with the band selling out a majority of their appearances this past August in markets that included New York and Los Angeles. Previously, Volbeat appeared in arenas across North America with Metallica and Lamb of God on a tour that stretched from October through December in 2009. The band is currently mapping out plans to return for a national tour of the U.S. Spring, 2011.
.
In an age of retreads, the band has been offering a unique blend of metallic hard rock alongside inspired Elvis-tinged melodies, and the world has taken notice. Prior to entering an alliance with Universal Germany, Volbeat released three albums with Netherlands-based independent label Mascot Records. Guitar Gangsters & Cadillac Blood (2008) and The Strength / The Sound / The Songs (2005) achieved platinum sales in Denmark, while Rock The Rebel / Metal The Devil (2007) has been certified gold. Volbeat is Michael Poulsen (Vocals / Guitar), Anders Kjølholm (Bass), Jon Larsen (Drums) and Thomas Bredahl (Guitar).

The complete track listing for BEYOND HEAVEN / ABOVE HELL is:
“The Mirror And The Ripper,” “Heaven Nor Hell,” “Who They Are,” “Fallen,” “A Better Believer,” “7 Shots,” ”A New Day,” “16 Dollars,” “A Warrior’s Call,” “Magic Zone,” “Evelyn,” Being 1,” “Thanks.” Guest appearances include Mark “Barney” Greenway from Napalm Death on “Evelyn,” and Mercyful Fate guitarist Michael Denner and Kreator’s Mille Petrozza on “7 Shots,” alongside others.
Email Post
Labels: news volbeat