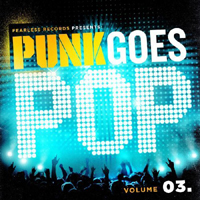 "Punk Goes Pop 3," the latest in the long running "Punk Goes..." series, and even though it’s just more of the same from the scene-addled series, that isn’t a bad thing. In fact, in this case, more of the same is a good thing - 14 tracks of songs written for teenage girls and cliché nightclubs covered by, and upgraded by, a host of today’s emo and metalcore acts doing their best in applying a nice coat of unique sonic personality. Though the series has trended steadily towards more of a mall-core feel overall, it doesn’t really lose a step in terms of execution. It’s still good for what it is.

Breathe Carolina opens the affair with a mostly spot-on cover of Jay Sean's 'Down,' applying their electronic wares before bringing everything to an abrupt, jarring halt through the employment of a floor-clearing breakdown and some much needed screamo-vocals. Artist Vs. Poet does an admirable job with a tune that has been, and probably will be, covered until the cows come home in Lady Gaga's 'Bad Romance,' and even though it isn’t as good as you might expect it to be, it’s still pretty cool. Mayday Parade's cover of Jason Derulo's 'In My Head' keeps things moving at a nice pace, and This Century registers one of the albums better cuts in M.I.A.'s 'Paper Planes,' a track which will require more than one listen to fully digest. Well, not that it’s a complicated piece; it’s just so catchy and so bouncy that it'll send you searching for the repeat button. Two other notable occasions are the Ready Set's cover of B.o.B's 'Airplanes' and Lady A's 'Need You Now' as performed by Sparks the Rescue.

The downside of "Punk Goes Pop 3" is that it houses more than its fair share of forgettable moments, most notably when the nu-metalcore bands take center stage. Woe, Is Me ('Katy Perry's 'Hot N' Cold'), Asking Alexandria (Akon - 'Right Now (Na Na Na)') and Of Mice & Men (Jay-Z's 'Run This Town') provide such uninspired yawn-fests, but the heavier side of "Punk Goes Pop 3" isn’t all bad. The Word Alive's take on Kayne West's 'Heartless' goes a long way in rescuing the rest of the chugging bands from the muck, and the albums closer, We Came As Romans' cover of Justin Timberlake's 'My Love,' is a nice entry into the "Punk Goes..." arena.

While "Punk Goes Pop 3" doesn’t quite live up to the shadow cast by its predecessors, there's still no denying this is a release that is good for what it is. And what it is, is fun.