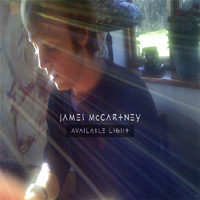 “Available Light” is an impressive outing, albeit a short one, a small smattering of things to come (hopefully) for James McCartney. And that should be no surprise, given McCartney’s musical pedigree. For those that don’t know (are you living under a rock or what), he is the son of living legend Paul McCartney. He has talent coursing through every vein in his body, and while it’s somewhat cold-hearted to drop just a five song EP (four originals, one cover) initially, one needs to think big picture here and keep in mind that “Available Light” is just the beginning.

McCartney is surely a talented songwriter, and most everything about his approach to, and execution of, songwriting gives him an ‘everyman’ feel, which is probably something you wouldn’t expect from someone of his lineage.

Though the EP begins with something akin to a generic whisper (‘Angel’), it explodes into a raucous roar with the second track, and the albums best cut in ‘Glisten,’ a song that sounds as if it could have an immediate impact at radio if given such an opportunity, something which really speaks to “Available Light” as a whole – every single one of these songs would thrive given the chance at mainstream radio. It’s that characteristic that fuels this EP as a success. It’s relatable, it’s passionate, and it is applicable to everyday life. Be sure to come onboard for the four original compositions, and stay for the EP’s closer, a tremendously spot-on, picture perfect cover of Neil Young’s ‘Old Man.’

With the glowing narrative that is “Available Light” it is easy to say that McCartney’s looking exceedingly promising.