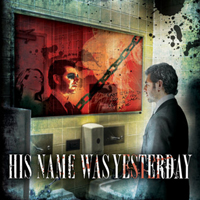 “His Name Was Yesterday” is a forceful tidal wave of sound, one that crashes down upon listeners with intense, symmetrically swirling guitars, drum work that hits like a brick wall and ambidextrous, stirring vocals. In all honesty, this debut full length could not have gone much better for Buffalo’s His Name Was Yesterday, a band who surprisingly has but one EP release to their credit.


The record doesn’t take too much time to show you what it’s about, immediately engulfing you with its first two tracks, tracks that fully display the bands polished sonic aesthetic. ‘Where It Ends’ brings the heavy that the band should (hopefully) be known for by now – jarring blasts of guitars that, when coupled with the bands vibrant rhythm section, fuel such forceful offerings, and ‘Again and Again,’ which successfully displays the bands well-versed melodic abilities. “His Name Was Yesterday” continues mostly along one of these two paths – profound, dynamic metalcore (think “the Oncoming Storm”-era Unearth) complete with cascading layers and all-encompassing crescendos (‘Killshed,’ ‘Echoes of the Past’) and blueprint, metal-coated hard rock rife with melodic upsurges (‘No More Tomorrow,’ ‘Face the Truth’). The record also plays host to some early Bullet for My Valentine-esque ballads (‘Lost Our Way,’ ‘It Always Ends in Fire,’), which further the work; adding yet another stratum to the bands already comprehensively layered sound.

If the band’s debut EP “Witness to a Dying World” was HNWY’s jumping off point, then “His Name Was Yesterday” is the vehicle that introduces this incredibly talented band to world. It is an effective exclamation point on the bands spot as one of, if not the, best bands the fair city of Buffalo has to offer (the latter is more than likely more true).