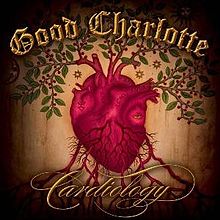 Though it does effectively shed the shackles of the lifeless, generic and more than likely corporate board room created sound of 2008’s “Good Morning Revival,” Good Charlotte’s latest release “Cardiology” does little to re-establish the bands prominence, and more importantly, relevance, in today’s fickle music scene. Yes, while it is endearing that the band is currently enduring a renaissance with this new disc, opting to return to their fashionable pop-punk roots, it’s still Good Charlotte and at last check, the year is 2010, not 2001, meaning there might not be much room for them anymore.

“Cardiology” does find the band turning the clock back about a decade in terms of sound, back to a mostly simpler musical time, a time when bands like Yellowcard, Simple Plan and Sum 41 owned the airwaves, with sweeping harmonies, gang vocals and guitar solos running rampant, all comingling and doing their part in making “Cardiology” sound pretty similar to something akin to Blink-182 (‘Counting the Days,’ ‘Let the Music Play’), though the good times don’t really last and end up overstaying their welcome in the long run. At times “Cardiology” comes off as something you’d find next to Justin Bieber in any 14-year-old’s iPod (‘Last Night,’ ‘Like It’s Her Birthday’), which is its ultimate downfall, and that’s not even speaking of the inane, mostly forgettable songwriting. But hey, that really has never been the strong point for Good Charlotte.

It’s unfortunate that the band didn’t completely abandon their trite synthed-up, dance-y sound, as those sonic nuances still remain prevalent, but in all honesty, this band has never been able to escape formulaic tendencies. And that’s why people love them. Sure, the bands stylistic shortcomings take center stage on a song like ‘Sex on the Radio,’ but they also shine on the albums best work, ‘1979.’ The latter’s acoustic pop-punk grooves separate from the rest of “Cardiology’s” pack. And while we’re at it, the ultimately flawed but thoroughly enjoyable ballad ‘Harlow’s Song (Cant Dream Without You)’ deserves a mention.

While “Cardiology” might not completely make you forget that the band once thought they were a dance-rock band (see “Good Morning Revival,” actually on second thought, don’t), at least Good Charlotte seemingly has realized that they used to make music people actually enjoyed. No, it’s not their best, and no, it’s not perfect, but hey, maybe it’s something the band can build on. With “Cardiology” Good Charlotte might effectively end their streak of releasing albums that sell copies in the seven figures, but at least it sounds like a start to something promising.