Reliving History, One War at a Time: A Conversation with Ed Warby of Hail of Bullets 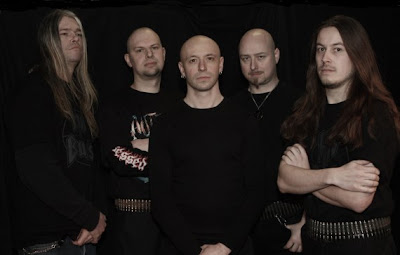 Reliving History, One War at a Time: A Conversation with Ed Warby of Hail of Bullets
http://www.hailofbullets.com/

Concept albums aren’t supposed to work, right? They’re hit or miss; when they hit, usually you’ll be blown away, and when they miss, they’re epically bad. Normally, bands have one crack at the vaunted concept disc. The sheer idea of more than one working out seems ludicrous. Just try telling that to Metal Blade recording artists Hail of Bullets. The German metallers have released nothing but concept discs thus far in their career, the latest being their historically rich full length, “On Divine Winds,” a disc rife with the bands trademark ‘war-themed death metal,’ topped off with absolutely stunning artwork.

Check it out - the band’s debut “…Of Frost and War” revisited the battles at the Eastern front during World War II, and “On Divine Winds” focuses on the war between Japan and the US in the Pacific. Oh, and in-between there was the “Warsaw Rising” EP that saw the band cover Twisted Sister’s ‘Destroyer.’

On the heels of the release of “On Divine Winds,” drummer, and subsequent producer, Ed Warby, took some time to bring us all up to speed regarding not only the new release, but a plethora of other things including the stories behind the concepts and the origins of the bands striking artwork.

Get eXposed Music: You’ve been described as ‘war-themed death metal.’ So, what’s that all about? It sounds cool but what does that mean?
Ed Warby: Well, when we started this band we agreed we were going to be playing old school death metal, but there were no set plans beyond that. It was only when I made some instrumental demos of the song ideas I had that the war theme was born. Martin said that the riffs reminded him of tanks, explosions, battlefields, etc. He'd wanted to do an album based on the Eastern Front for years and when he heard these demos he knew that he'd found the perfect vehicle for it! In my opinion it's a perfect marriage between music and lyrics, and it gave us the benefit of not getting stuck with third rate gore or satanic lyrics. And it so happens that mankind loves waging war so there's no shortage of lyrical inspiration.

GE: Your new album, “On Divine Winds,” has a pretty cool concept to it. Care to explain?
“On Divine Winds” is a concept album about the war between Japan and the US in the Pacific. Martin van Drunen, our singer, wrote all the lyrics and he goes to extreme lengths to make them as detailed and historically accurate as possible. Apart from the opening track which deals with the attack on Pearl Harbor the events are told in chronological order from 1931 to 1945. The album actually ends with the speech in which emperor Hirohito declares the surrender of Japan.

GE: What about the Japanese empire is so interesting that you decided to dedicate an entire release to it?
The album is not about the Japanese empire per se, it's about the Pacific war in general with as much playing time devoted to the US as to its enemy. On previous releases we looked to Russia, Germany and Poland for inspiration, and this time we decided to focus on the other great theatre of war. It's a very rich and dramatic story with brutality as well as humanity, which is just what we needed for this record.

GE: Why attempt a concept record on just your sophomore release? Most concepts discs are very vague and end up mostly as epic fails.
Our debut album "...Of Frost And War" was already a full (and by most accounts successful) concept album, so maybe the question should be "why attempt another concept record?" I totally agree on concept records having a huge potential for being pretentious, vague, overblown affairs but I think we use a different, more effective approach. We don't try to tell a story as such, instead we focus on certain events that transpired and try to re-create these using the means at our disposal. We don't add fictional elements or characters, and Martin's bleak but vivid writing style ensures we don't lapse into melodrama or vagueness. Either way we felt confident enough about doing a concept album to try our hand at it a second time.

GE: Tell me about the recording process of “On Divine Winds.” How did it go?
I made complete pre-production demos in my home studio first, and then we recorded the drums at Excess Studios. Once those were in the can we began building up the wall of guitars and bass in my studio and finally we went back to Excess to do vocals. As soon as we had everything we started working on the mix in Sweden. The main difference with the first album was that we didn't stay in Excess for the whole recording process; the advantage was that we were able to work whenever we felt like it, instead of having to cram everything in three weeks. Because of this we did take longer to record this one, but the added level of control over the recording schedule and quality of the takes was definitely worth it.

GE: Adding to the mystery and intrigue of the disc, it, of course, has absolutely stunning artwork. Who did it, and how did you come up with the idea for it? And most of it, what’s it depict?
The artwork was once again done by our resident genius, Mick Koopman. He did our first album and the “Warsaw Rising” EP, great guy with an uncanny talent for visualizing our ideas. The cover depicts a US ship being attacked by Japanese aircraft, it's a fictitious scene but it is a very powerful image and leaves no doubt as to the subject of the record.

GE: What is next for Hail of Bullets?
Playing live mostly, we can't wait to take these new songs to the stage! There are still some countries we haven't visited, as well as some we need to re-visit, so we'll have a busy year ahead of us. And once things quiet down again we'll start working on new death metal ammo!
Email Post
Labels: hail of bullets interviews