Free Music! The So So Glos - 'Fred Astaire' 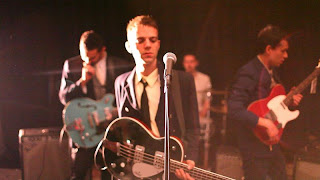 Meet The So So Glos. Theirs is a New York story, not in the "only in..." sense-despite their unusual beginnings-but in the way that New York's story is about inclusion amidst tumult, about embracing both dark days and bright nights, about politics being personal and doing it yourself.

They are, literally, a band of brothers. Singer-bassist Alex and guitarist Ryan Levine were raised under the same Brooklyn roof. Drummer Zach Staggers became their stepbrother at the age of 4, and lived nearby anyway-they'd gone to preschool together and founded their own proto-punk "Bad Boys Club." Guitarist Matt Elkin arrived in 2007, one year after the band formed, a long-lost sibling in spirit whose induction to the fraternity was immediate and complete. And in their four years, the Glos have cut a brash creative swath through their native city that includes three records made, two all-ages venues founded, and at least one jaw broken.

Though the group's nascent years were framed by divorce, music was a constant. They've been in bands together ever since, called themselves names that reflected their young but advancing years-the Dinosaurs, then Spitt, then Urban Eyze-and played their first gig in junior high, decidedly punk rock throughout. But it wasn't until Alex, Ryan and Zach were in college and ready to drop out that they made their move. The freshly minted So So Glos bought a bus, press-ganged Matt, and booked themselves a veggie-oil-fueled tour of the U.S.

The Glos had just self-released their eponymous debut (reissued by Green Owl in 2008), a diverse collection of grungy, Ramones-influenced bangers produced by their oldest friend, Adam Reich, a fellow Bay Ridge native who'd taped their earliest experiments at his house when they were boys. Reich was working in a Staten studio, and snuck the band in after midnight-small consolation after a scrap between Zach and Alex left the singer's jaw wired shut.

When the foursome returned from the road, they'd worked out the kinks, and collaborated with famed promoter Todd P. to found all-ages D.I.Y. venue the Market Hotel, which they moved into and helped build by hand. Their next album, 2008's Tourism/Terrorism, was recorded in a sleepless week on an actual budget, and yielded not only comparisons to peers like the Libertines, but a pair of high energy, grit-caked hits-"My Block" and "Throw Your Hands Up"-that illustrated a glimpse into the born New Yorkers' ethos: the only constant in the city is change, which is a reflection of the world at large. Welcome change into your life and art, and you welcome the world.


Along the way, the Glos have earned a reputation for a ripping live show, which they've brought to all-ages clubs, fans' kitchens, scene fundraisers and traditional venues alike. They've also constructed (literally) a new performance space and HQ, Shea Stadium, which has hosted punk rock fetes as well as overnight dance parties with Danceteria and avant 1980s DJs. October brings a fresh EP recorded at the Rare Book Room by Nicolas Vernhes (Deerhunter, Fiery Furnaces, Animal Collective). Naturally, it's named Low Back Chain Shift, after a distinct facet of the New York drawl.

The So So Glos released "Low Back Chain Shift EP" on Green Owl Oct. 12.