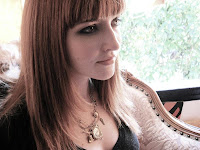 After touring the world with Vivian Girls, releasing a handful of well-received records, and starting record label Wild World with her band mates, Goodman started exploring other outlets. She played in the short-lived dream-pop band All Saints Day in the spring of 2010, and a self-titled limited-edition 7" of spectral tunes was released on indie label Art Fag earlier this year.

In February 2010 Goodman started working on some fresh material that inspired the formation of her brand new band, La Sera. Her inspiration sprung from an attraction to early pop hits from the 1950's and ethereal choral vocals. Her new songs contain warm celestial-pop melodies that echo with the dreamlike effect of a church choir and effuse a softer, less aggressive sound than the Vivian Girls.

Recording with a tambourine, guitar, and layers upon layers of heavenly vocals, she started sending her songs to filmmaker/music producer Brady Hall (the director of Vivian Girls videos "Moped Girls" and "When I'm Gone"), who immediately wanted to collaborate and dove into re-recording her rough material himself. After hearing his finished work, Katy flew to Seattle and the two recorded all the vocals, mixed the songs and filmed two La Sera music videos at Brady's home studio.

The eponymous La Sera is the result of these sessions. With a dozen fresh tracks, La Sera muses on death, love, and love lost within the span of two minute choiral pop blisters. The phantasmic quality of Goodman's voice takes hold of the contradictorily upbeat "You're Going to Cry," while "Dove Into Love" seems to send time into drifting slow motion, enveloped by a wave of guitar strums. The lilting and delicate "Hold," meanwhile, tells the story of two people hugging each other to death. Hardly Art will release the full-length in early 2011, preceded by a limited 7" for "Never Come Around" in November 2010.