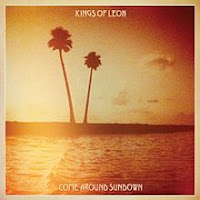 It’s may not be too obvious to the naked eye, but right from the start of “Come Around Sundown,” the fifth studio recording from Grammy winners Kings of Leon, you can tell that this album isn’t quite the album 2008’s “Only By the Night” was. It seems that with this new disc the band is comfortable putting out an album content on riding the uber-successful coattails of its predecessor as opposed to blazing a trail all its own, something many fans and critics worldwide surely expected it to do.

“Come Around Sundown” is a vanilla record at best, a less aggressive offering that doesn’t really present much new in terms of sound for KOL. The somewhat memorable material housed within the record, passable tracks with a slight lingering effect like ‘Radioactive’ and ‘Back Down South,’ is often pulled asunder and ultimately lost in the shuffle with more forgettable songs like ‘Mary’ and ‘Pyro.’ ‘Beach Side’ could be looked upon as a standout track due to its beachy waves and sunny disposition, though after a few listens it starts to just meld together with the rest of the record, ultimately losing its appeal due to its surrounding body of work.

The subtleties on the record are few, and hard to notice at first, but they are there – the hooks, the melodies, the hidden intricacies to the music – and are good once revealed, though they don’t really offer that much in the way of saving this disc from mediocrity.

Fans of the Kings will probably salivate over the disc, though after a few spins and a little bit of time, “Come Around Sundown” begins to lose a bit of its luster. In the end, it isn’t “Only By the Night,” no matter how hard the band tries to pawn it off as such. The bottom line is that this record will get old quickly.