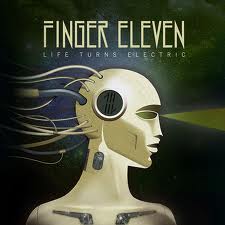 Finger Eleven have long been a tale of two bands. While that may sound a bit confusing, because, yes, they are only one band, one merely needs to take a look, and listen more importantly, to the changes in their sound throughout the years. In the early stages of their existence, the band presented a heavier, metal-tinged sound. It wasn’t quite nu-metal, though they existed during that period, it was something more, something a bit more involved that the simple song structures that style of music was known for. “Tip” and “the Greyest of Blue Skies” were albums released in this sonic vein, yet when the band came around for their third release, 2003’s “Finger Eleven,” things were beginning to change. While you still had songs like ‘Good Times,’ ‘Absent Elements,’ and ‘the Last Scene of Struggling,’ it also saw a somewhat progressive altering of the bands aesthetic with songs like ‘Therapy’ and ‘One Thing.’ Enter the follow-up “Them Vs. Us Vs. You” and songs like ‘Paralyzer’ and ‘I’ll Keep Your Memory Vague’ and you have the point at which Finger Eleven tumbled so far down the rabbit hole that they could no longer see daylight.

Fast forward to now and the bands fifth studio offering “Life Turns Electric,” an album so full of ‘Paralyzer’-esque songs, it rarely resembles what this band used to be in terms of sound. It’s not so much a progression as a logical next step for Finger Eleven, who truly began this decent almost a decade ago.

The album, in essence, is one built around tracks that have the potential to garner some radio play, though the band might have a tougher time than they thought carving out a spot for themselves on radio waves currently subjugated by Lady Gaga, Katy Perry and Avenged Sevenfold. “Life Turn Electric” is dominated by clean cut, straight ahead, hook driven cuts like ‘Any Moment Now,’ ‘Pieces Fit,’ ‘Good Intentions’ and ‘Don't Look Down,’ and doesn’t really spend time deviating from this pretty standard blueprint, except to toss in the occasional ballad.

The question is, will you like “Life Turns Electric?” Well, that all depends on you really, because if you have been a fan of this band since they were named the Rainbow Butt Monkeys, then, no, in all likelihood you will laugh at this disc, but if ‘Paralyzer’ or ‘One Thing’ are your favorite F11 songs, you will eat this disc up upon first listen.

If nothing else, “Life Turns Electric” ends the argument as to what Finger Eleven release truly is the worst.

Grade: D
Listen to: ‘Livin’ In a Dream’
Email Post