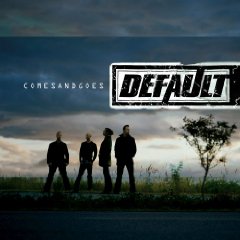 Usually, going four years in-between major releases could cause a band to develop a little rust. And switching record labels in that downtime might even cause some bands to simply call it a day and fade into the night, but not Default. Very few bands would take that time, take those career altering changes and use them to get better, which is exactly what these north of the border rockers did. Their latest, “Comes and Goes,” is the first offering from the group since 2005’s “One Thing Remains,” and finds the band at their most focused, and offers fans the bands tightest grouping of songs they have put together to date.

Although “Comes and Goes” has its moments of nu-rock that simply scream Buckcherry (or insert obligatory party rock band of your choice here), it is still one that is rife with a sound very obviously Default. No, they aren’t quite changing into a clone of the afore mentioned band, but they could very well be on their way. With “Comes and Goes” Default sounds as if they have a better grasp of their sound now more than ever. They are able to balance a song like ‘Turn It On’ with a song more like what you’d expect from them (‘Comes and Goes’).

It is that coexistence that makes “Comes and Goes” a good record, one that also flourishes due to the fact that there is more than one type of song. The record bounces back and forth between high-quality prototypical modern rock (‘Hold Onto You,’ ‘Fascination’), effective, yet somewhat middling ballads that would list Daughtry as a fan (‘Little Too Late,’ ‘Show Me’) and balls-out nu-rock laden with the bands own swagger (‘Goodbye’). Ironically, it’s the non-ballads, the more cocksure straight-ahead outings that make “Comes and Goes” memorable, but on the whole the main selling point of the record remains the bands ability to produce crisp and fashionable hooks that carry song after song.

“Comes and Goes” is an easy record to get into, and an even easier record to find yourself a fan of.

Grade: B
Listen to: ‘Turn It On’
Email Post
Labels: cd reviews comes and goes default