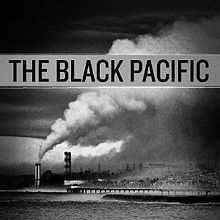 For those wrought with feelings of loneliness in the wake of the disbanding of veteran punk kings Pennywise, take heed – your prayers have been answered. Former Pennywise frontman Jim Lindberg is back, no, not with a Pennywise reunion, but with a new band, the Black Pacific. The problem the bands eponymous debut runs into is also its greatest attribute, the simple fact that Jim Lindberg is the bands frontman. The problem it presents is that there really isn’t much separation between this band, the Black Pacific, and his old band, Pennywise, something that could also be looked upon as a good thing. The albums tracks are laced with political intent, again, something you would well expect given what Lindberg has about most of his career, which is expressed through tightly knit and compactly wound explosive punk. Sometimes it errs on the side of a melodic onslaught, while other times it gives way to a certain pop sensibility and a number of breakdowns. Overall, "the Black Pacific" is ten tracks run though in just about 32 minutes time, which is something that Lindberg is known for given his past charges. What it also means is that there is very little room for error here and very little room for tangent off-shoots, two things that this record doesn’t waste any time on. The only looming dilemma with the Black Pacific is that it is near impossible to mention the band without mentioning Pennywise in the same breath. The two go seemingly go hand in hand, which might leave some listeners and fans quietly thinking to themselves – ‘why wasn’t this just released as a Pennywise album?’ Sure this release is solid, but it really doesn’t offer anything new. (www.myspace.com/blackpacific)
Grade: B-
Go Download: 'When It's Over'
Email Post
Labels: jim lindberg pennywise the black pacific