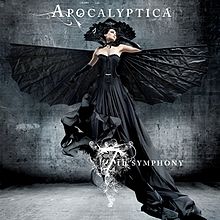 Right from their inception, Finnish outfit Apocalyptica was a unique and pretty cool concept – four classically trained cellists jamming out instrumentally arranged versions of metal classics (Metallica, Faith No More, Pantera). But since those days the band has undergone a makeover in terms of sound, moving away from cello fueled numbers and more towards contemporary hard rock with a plethora of guest vocalists. What effects the guest vocalists have added to "7th Symphony" are twofold. On one hand, the guest spots add another layer to what the band is able to accomplish sonically – 'End of Me' (Gavin Rossdale of Bush) and 'Broken Pieces' (Flyleaf’s Lacey Mosley) represent two times that this experiment goes right, though isn’t all great shakes. 'Not Strong Enough,' a lackluster power ballad that features Shinedown’s Brent Smith, symbolizes the other side of things, as it doesn’t really offer anything to "7th Symphony," yet actually detracts from the effort in the end. The album shines the brightest when Apocalyptica return to their roots so to speak, letting their cellos do the talking, as on tracks '2010' (Slayer’s Dave Lombardo) and 'Bring Them to Light' (Gojira’s Joseph Duplantier), though these two songs aren’t exactly enough to save the disc from overall mediocre status. Apocalyptica has a good thing going on for them – they have a carved out a nice little niche for themselves within the metal community, though there are those who merely look at this once heralded group as something of a tired gimmick. It’s good for what it is, but it isn’t as groundbreaking when compared to what the band has released in the past. (http://www.apocalyptica.com/)
Grade: B-
Go Download: 'Broken Pieces'
Email Post
Labels: 7th symphony apocalyptica