Reviewed! Adam Ilami - "All the Things You Want" 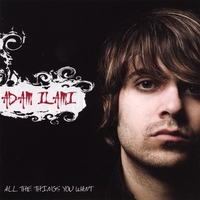 Adam Ilami
“All the Things You Want”
Texas Is Bestas Music
www.myspace.com/adamilami

An interesting animal is “All The Things You Want,” the latest from Hollywood (by way of Arlington, Texas) pop-rock merchant Adam Ilami, an ever-changing work that seemingly defies any one genre, yet opting for more a fusion of sound. And that’s the records strongest characteristic, Ilami’s undeniable knack to defy classification and categorization, that has most of “All the Things You Want” coming across as a triumph.

Ilami is no better than when performing in the pop rock arena. His words are ultimately relatable, while is sound is clearly marketable – two things that most any musicians and songwriter would probably sell their soul to possess – yet Ilami’s tunes just ooze it. Though this combination of overall mainstream viability and relevant storytelling fuels most of “All the Things You Want” (‘Independent Nation, ‘All the Things You Want,’ ‘the Night the Two of Us Died’), the record doesn’t stop there, as it moves into some heady blues rock territory (‘On the Inside’), while taking the time to slow the pace and decelerate the work a bit, in order to integrate some heart-rendering moments (‘Hangman,’ ‘Vacation’).

Ilami’s ability to sonically fuse pop, rock and blues make “All the Things You Want” noteworthy, an album that isn’t content with a slab of similar sounding songs housed under one umbrella. Ilami isn’t afraid to display his multitude of talents, and if this record does nothing else, it surely does just that.