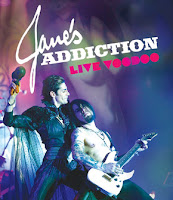 25 years and counting (with some obvious, much publicized speed bumps along the way), Jane’s Addiction are back to exhibit their wares with their new live DVD release, “Jane’s Addiction: Live Voodoo,” a strong presentation of some of the bands best work ever, packed tightly into one DVD offering.

“Live Voodoo,” which was filed Halloween night of 2009, sees the classic formation of Jane’s Addiction return to the stage – Perry Farrell, Dave Navarro, Eric Avery and Stephen Perkins - with a vengeance. They show no signs to stage rust in any way, returning to their roots literally, as the performance includes no tracks from the bands most recent studio release “Strays,” as the entire set is comprised of favorites from their first two releases – 1988’s “Nothing’s Shocking” and 1990’s “Ritual De Lo Habitual.” The show is opened in stellar fashion with ‘Up the Beach,’ then ebbs and flows between favorites that whip the crowd into a tizzy, such moments as ‘Mountain Song,’ ‘Been Caught Stealing,’ ‘Ocean Size,’ ‘Summertime Rolls’ and the penultimate ‘Jane Says,’ before ‘Chip Away’ effectively puts a stamp on the close of the night.

Aside from the show itself, there are of course some bonus features. These include a four-minute behind-the-scenes feature about the band's NME appearance (which led to the short-lived reunion of the original line-up), as well as two additional live tracks—‘1%’ and ‘Ocean Size’—both from 2008 and shot on inferior audio and video. There is also a little photo gallery for fans to enjoy.

With “Live Voodoo,” this cast of characters was pretty much boom or bust, meaning it had the chance to go terribly wrong, though, with one viewing of this show, it’s obvious that quite the opposite occurred. The band is at the top of their game throughout, and hopefully it could signal a sign of things to come as far as the band having any sort of staying power in the future (though Avery already quit the band this year).