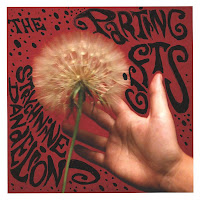 What began as a one-off split-45 by songwriters Greg Cartwright (The Oblivians, Compulsive Gamblers, Reigning Sound) and Coco Hames (The Ettes, Coco Motion) quickly evolved into The Parting Gifts, who will release their debut full-length album this fall on In The Red Records.

"I thought, I'd write a song, Greg would write a song, we'd record them together, and that would be that," says Hames. "Luckily Greg's prolific awesome switch was on, and we got this whole record instead."

Offers Cartwright, "I was just so impressed with how easily things went that I was inspired to write more material for the project."

And as if the talents of Cartwright and Hames weren't enough, the album features intense performances from Dan Auerbach (The Black Keys, BlacRok), Patrick Keeler (The Greenhornes, The Raconteurs), Jem Cohen and Poni Silver (The Ettes) and Dave Amels (Reigning Sound, Daptone). The result is an impressive 14 original songs penned by Cartwright and Hames, as well as a haunting cover of the Rolling Stones' "Walkin' Through the Sleepy City". Catch The Parting Gifts tonight at this year's Gonerfest 7 in Memphis, TN just in time for their debut album to make its way into your record collection.

The Parting Gifts will drop "Strychnine Dandelion" via In The Red Nov. 9.