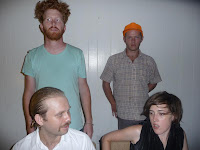 The swarming wave-throb, coupled with Hunter's lyrics and redolent, charred voice, wrecks. The band's upcoming record, Twin-Hand Movement, is eleven perfect songs long. From opener "Blue and Silver" (anxiety mounts at a quick clip until the final climactic release) to "Plastic and Powder" (a churning, narcotic slow-burner) to "Hospice Gates" (penultimate album cut, proud weirdo anthem, possible creative zenith), not one is a space-taker. They're rife with the survivalist paranoia you'd expect from residents of a post-urban port hole (and this particular songwriter), crafted methodically and beautifully, and carry you enthusiastically out into the rolling breaks of industrial filth-water.