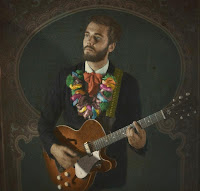 In Spring 2010 Ben S. escaped to Northern Michigan for a few days. There on the shores of Lake Huron where he spent much of his childhood, Ben recorded some songs. Three of those songs became Lord Huron's first EP, Into The Sun.

When the time came to put a band together, Ben called his old friend Mark, who had recently come off a contract aboard a cruise ship and was gigging around in Nashville. Mark packed up his drums (and other gadgets) and drove straight across the country to join Ben in Los Angeles. The pair then recruited Miguel (bass, electronics) and Peter (guitar), both of whom had performed with Mark on cruise ships in the Caribbean. Rounding out the lineup is Brett (guitar), who has been playing around Los Angeles for years. All hail from Michigan.

So far, Lord Huron's output, the Into The Sun EP has only existed as a download from Bandcamp - but L.A. label Hit City U.S.A. will be releasing a 7" with two of the songs from the EP later this month. Lord Huron's second EP, Mighty, will be released on Nov. 2 as a CD and digital release.

Lord Huron will release the "Mighty EP" Nov. 2. And the "Into The Sun 7" on Hit City U.S.A. Nov. 16.
Pre-order link: http://store.hitcityusa.com/product/lord-huron-into-the-sun-7