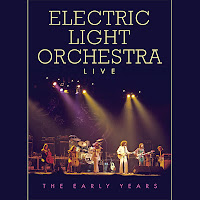 “Electric Light Orchestra Live: the Early Years” is just that, a look at the beginnings of the seminal prog-rock outfit, a DVD full of live footage from 1973-76 that showcases both the good and the bad of ELO. At the outset of the DVD, a 1973 performance from Brunel University, viewers will find an ELO band still in search of legs to stand on in the live arena, and these four tracks showcase the band attempting to pull everything together sonically. This performance from London does show that the band has tremendous upside even early on into their career (only three years in at this point), but it is effective in setting the table for things to come, most importantly the second set of performances from German TV show Rockaplast back in 1974. This set of songs finds the band working out some kinks as evidenced through such fan favorites as ‘Ma-Ma-Ma Belle,’ ‘In the Hall of the Mountain King’ and an energetic cover of ‘Great Balls of Fire.’ Throughout this performance you can easily tell that this band was well on their way to realizing their destiny seemingly, that destiny being to become worldwide superstars.

It took a little more time in order to smooth out the edges, but come the third part of “Electric Light Orchestra Live: the Early Years,” the bands 1976 ‘Fusion’ tour. Not only is this set substantially longer than the previous two, it shows that it about this time in 1976 that ELO sounded as if they figured it all out and had put it all together on tracks like ‘Can’t Get It Out of My Head,’ ‘Evil Woman’ and ‘Strange Magic,’ as well as other favorite as the afore mentioned ‘Ma-Ma-Ma Belle.’

As for anything additional bonus content there isn’t much to write home about. Basically all you are going to see is about a 30-second clip of an interview with ELO from Rockaplast. Given the historical timeline “Electric Light Orchestra Live: the Early Years” presents, it would have been nice to see a bit more digging to unearth a bit more bonus content.

The video footage at times is a bit raw and grainy (most notably the Brunel University performances), though Eagle Rock does a pretty admirable job cleaning things up. The sound is crisp and mostly clean, something Eagle Rock is quite adept at.

In the end, “Electric Light Orchestra Live: the Early Years” is as progressive as ELO themselves.