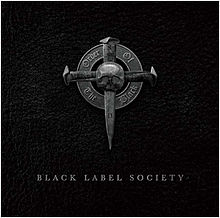 "Order of the Black"
E1 Music

Drummer Craig Nunenmacher is out, replaced with journeyman Will Hunt (Static-X, Evanescence, Crossfade), a switch which might represent the only significant change for Black Label Society on their newest release, "Order of the Black," because they surely haven’t switched anything in terms of sound, which, if you’re already a fan of the group, isn’t a bad thing. Black Label Society is who it is – a chugging juggernaut and riff-tastic beast full of frenetic guitar soloing that have operated in much of the same way for years and years. This is as straight ahead as guitar rock comes, unapologetic and unabashed, two adjectives that could also go a long way in describing frontman and band mouthpiece Zakk Wylde. While the songs housed on "Order of the Black" are pretty interchangeable in the long run, the riffs driving these heavy metal diatribes are not. It’s no small secret that Wylde is one of the more innovative and flat-out talented shredders in the business today, and "Order of the Black" is proof positive of that fact. The record is littered with razor sharp, precise guitar work, something you’d expect if you know anything about the group before going into "Order of the Black." The overwhelmingly Southern groove is still there as well, something, again, the band, and Wylde for that matter, has become known for through the years. Even though "Order of the Black" is BLS’s first release since Wylde amicably parted ways with the venerable demon lord Ozzy Osbourne, it is a record that finds the band as effective as they have ever been. When compared to what the band has done in the past, "Order of the Black" is no better and no worse, it’s just good. (http://www.blacklabelsociety.com/)
Grade: B
Go Download: 'Parade of the Dead'
Email Post
Labels: black label society order of the black zakk wylde