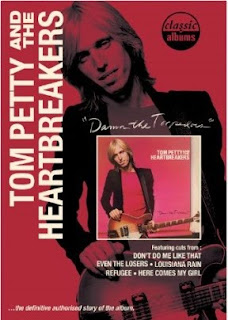 Tom Petty and the Heartbreakers
“Classic Albums: Damn the Torpedoes” DVD
Eagle Rock Ent.
The superb “Classic Albums” DVD series continues with Tom Petty and the Heartbreakers and a deconstructed view of their influential record “Damn the Torpedoes.” And for those that don’t know (honestly? those people exist?), this is the record that brought us such hits as ‘Refugee,’ ‘Even the Losers,’ ‘Don't Do Me Like That’ and ‘Here Comes My Girl.’ It is those songs that get the most attention on this DVD, and it makes sense, they are pretty popular. Though “Classic Albums” focuses less on the actual writing of the songs, the time spent discussing the recording process makes up for it. Petty, joined by guitarist Mike Campbell and Jimmy Iovine go through the record literally reel by reel in the studio, while engineer Shelly Yakis and keyboardist Benmont Tench offer their views on some other cuts from “Damn the Torpedoes,” ‘Louisiana Rain’ and ‘Here Comes My Girl.’ An interesting dynamic of the DVD is the fact that Petty’s bandmates make no bones that Petty was the driving force behind the creation of this album and these songs, though when asked anything to that point, Petty gushes over the talents and contributions of his bandmates. Drummer Stan Lynch is strangely absent from the documentary, and while his absence isn’t explained, he is represented in file and stock footage, though the doc looses a bit without him present. Another shortcoming is the fact that the doc spends so much time on the afore mentioned ‘hits’ that they don’t do the full album itself much justice – deeper cuts and the lesser known tracks off the effort aren’t truly represented (‘Century City,’ ‘What Are You Doin' In My Life,’ ‘You Tell Me’), though they are touched on during the bonus content. And speaking of the bonus footage, it spans roughly 42 minutes, which takes the time to shed some light on the rest of the disc’s material. Fans of the band, fans of the record, take heed, this is a DVD you need to have on your must-purchase list.
Grade: B
Email Post