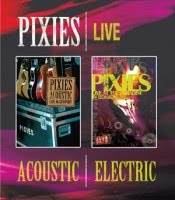 The Pixies
“Live Acoustic and Electric” DVD
Eagle Rock Ent.
Two concerts, one full on electric and the other stripped down and acoustic, though both unique in their own right, make up the Pixies latest DVD release, “Live Acoustic and Electric,” a DVD title that pretty much straight to the point. The acoustic portion of the DVD takes place in Newport, while the electric portion takes place in Boston. Beginning with the former, the acoustic performances offers up most all of the bands vaunted favorites, from early works like ‘Bone Machine’ and ‘Cactus,’ to more modern day cuts like ‘Subbacultcha,’ the only track included in the set off the bands “Trompe Le Monde.” Frontman Frank Black embraces the six-string unplugged setup rather nicely, something you’ll hear while watching the show. Moving on, as the DVD does, to Boston, we are taken to the Paradise in Boston, a small venue boasting somewhere around a few hundred fans of the band. It’s during this performance that the venerable band embraces their afore mentioned final recording “Trompe Le Monde,” ripping off a handful of songs off of it such as ‘U-Mass,’ ‘Planet of Sound,’ and ‘Sad Punk.’ This portion of “Live Acoustic and Electric” gives viewers the Pixies in all their glory, and for those of you reading who may have never seen this act live, the Paradise set is your best chance to feel like you are part of the action. The TT The Bear's bonus footage is beyond classic, catapulting you back to the mid-80’s as the band fire off a dozen tracks, including ‘the Holiday Song,’ ‘I’ve Been Tired’ and ‘Ed is Dead.’ Suffice to say, “Live Acoustic and Electric” is a DVD release that give you near unrestricted access to the band, both now, and then – a must-see for rabid Pixies followers. Is just another piece of their everlasting legacy.
Grade: A
Email Post