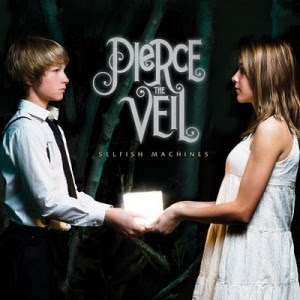 Pierce the Veil
"Selfish Machines"
Equal Vision
"Selfish Machines" might just be Pierce the Veil’s best album. It is an album that sees the band refine, without redefine, their already polarizing post-hardcore sound. The band effectively smoothes out the edges, and rounds out the corners as it were, without having to go so far as to tear down and rebuild or alter their core sound in any way. Above all else, the band was able to efficiently intertwine an enhanced air of technicality into their music, and at the same time they were able to augment their core tautness as a band. No one part is greater than another – nothing will immediately jump off the page at you in terms of guitars or drums, it’s just that everything works nicely in unison. Jeremy McKinnon of A Day to Remember lights a fire on 'Caraphernalia,' though this is merely one stopping point along the highway of highlights that is "Selfish Machines." The hits keep on coming as they say, in the way of songs like 'the Boy Who Could Fly,' 'Stay Away From My Friends,' and 'Besitos,' songs that really amplify the fact that PTV have come a long way as a band. The hooks are good, though sometimes perhaps too good, meaning they are far too catchy for their own good, leading some songs, namely 'Fast Times at Clairmont High' and 'Million Dollar Houses,' to become inane in nature, which should cause them to be skipped for the most part. That is not to say that "Selfish Machines" isn’t a catchy record, because it is. It is one that will surely stick with you long after you stop listening, though it’s more catchy than memorable.
Email Post