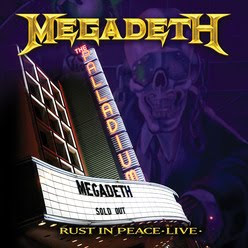 Megadeth
“Rust in Peace: Live” DVD
Shout! Factory
There’s really only a few differences between Megadeth’s “Rust in Peace: Live” DVD and the CD version of the same performance. First and foremost, this is a DVD. Yes, that sounds obvious, but think about it. First off, this DVD makes you feel as if you were in attendance at the Hollywood Palladium March 31, 2010. The performance is there – 1990’s “Rust In Peace,” the masterful slab of speed/thrash metal played from front to back. The songs are there – ‘Holy Wars…the Punishment Due,’ ‘Hangar 18,’ ‘Take No Prisoners,’ ‘Five Magics,’ ‘Poison Was the Cure,’ ‘Lucretia,’ ‘Tornado of Souls,’ ‘Dawn Patrol,’ ‘Rust in Peace…Polaris,’ and ‘Holy Wars – Reprise;’ everything good and great you remember from that seminal work from two decades ago is back, in all its live glory. The DVD offers the same bonus performance as the CD, but also tosses in additional visual aspects such as behind-the-scenes backstage footage of the band as well as the bands soundcheck and rehearsal, footage you will not see anywhere else but here.
You shouldn’t have to be sold on this DVD. If you are a fan of the band you will want to own both this and the CD version of the concert, and even though more people might opt for the CD version, remember this – it won’t make you feel like you were a part of the crowd, and part of history, but the “Rust in Peace: Live” DVD will. The CD version also won’t give it to you in 5.1 Digital sound or present it in widescreen. It’s about as simple as that.
Grade: A
Email Post