Reviewed! Maroon 5 - "Hands All Over" 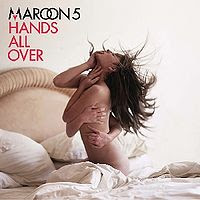 Maroon 5
“Hands All Over”
A&M/Octone
It’s somewhat hard to think that Maroon 5’s latest opus “Hands All Over” is just the bands third studio release to date, and fourth as a band (though many critics discount their “the Fourth World” album under the name Kara’s Flowers even though its near brilliant), but it’s the truth, and only the bands third release in close to a decade (8 years as Maroon 5 to be exact). Regardless, “Hands All Over” is just one more excellent addition to the bands already first-rate career spanning body of work, an album sure to be another chart topping success.
Going into this record, chances you know most everything that Maroon 5 is about – by now you should know their entire mantra and approach - but that’s just part of their charm. You know what you’re getting into with each new record, each new song, though you can’t help but listen because it’s just that good. Maroon 5 is a band set in their ways – and why not – they are great at what they do, and what they do is churn out incredibly silky smooth and polished hook orientated pop tracks; something “Hands All Over” is more than rife with.
This record offers up the best sound the band has set to wax yet, and while that has a little (OK, more than a little) something to do with the man at the helm – producer Robert ‘Mutt’ Lange (AC/DC, Def Leppard, Shania Twain), it also has a lot to do with M5 feeling comfortable in their own skin. They know what type of band they are, they know what type of sound they are known for, and really, the proof of that simple fact is “Hands All Over.” The melodies and hooks presented here sound as good as ever, evidenced by abundant pop sensibility fueled by a talented and confident frontman in Adam Levine (‘Stutter,’ ‘Never Gonna Leave This Bed,’ ‘Hands All Over’) and built-for-radio-play ballads that could be misconstrued as too sappy for their own good (‘I Can’t Lie,’ ‘How,’ ‘Just Feeling’), though they do offer another dynamic to the albums overall aesthetic. And that’s not even mentioning the albums opening track and lead single ‘Misery,’ which slots in as one of the bands most playful and fun tracks to date, and the closing ‘Out of Goodbyes,’ featuring country darlings Lady Antebellum, a song that feels a bit out of place, though entirely necessary to the success of “Hands All Over.”
Even though Maroon 5 is about as commercial and mainstream as they come, there is still something about them that makes them hard not to like as a band.
Grade: A
Listen to: ‘Misery’
Email Post