Reviewed! Goo Goo Dolls - "Something For the Rest of Us" 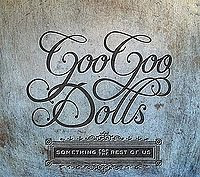 Goo Goo Dolls
“Something for the Rest of Us”
Warner Bros.
Don’t let the Goo Goo Dolls fool you. You know what this band is about, hell, if you’ve heard even one song of theirs on the radio throughout the years, you know what they have, and probably always will be, about. Enter “Something for the Rest of Us,” a record that really is just more of the same, but hey, in the case of the Goo’s, that’s not necessarily a bad thing.
“Something for the Rest of Us” is a quality collection of middle-of-the-road rock tunes, rife with tender moments and such, with more than a fair share of ballads strewn about along the way. The structures are fairly generic in nature – the buildups are understated, the climaxes subtle, while everything else in between is just sort of there for the most part. Sure, this aesthetic has been the bands calling card for years, a mantra that has lined the bands wallets time and time again, but it is when the band adds an edge to their music that “Something for the Rest of Us” really shines. ‘Sweetest Lie,’ ‘Say You’re Free’ and ‘Home’ are three such instances, though they are just merely three points along the journey. It is, in fact, a solid listen from start to finish. Each song includes here is a cog in the machine – they all serve an individual purpose, so there really aren’t any wasted moments.
With their ninth studio release, you’d think a band like the Goo Goo Dolls would have to lose a step, something, anything really. But in this case, the Goo’s give nothing up, even after being together for close to quarter of a century. “Something for the Rest of Us” isn’t the bands best work to date, yet it’s just another nice piece to their already great gamut of music.
Grade: B
Listen to: ‘Sweetest Lie’
Email Post