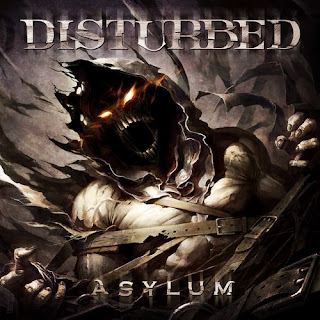 Disturbed
“Asylum”
Reprise
Like many of their hard rock nu-metal surviving brethren, Disturbed haven’t had much cause to change their approach when it comes to constructing an album, as evidenced by the bands’ latest release, “Asylum.” While clinging firmly to their successful formula of the past, the band’s fifth studio release sees some polish added to their signature, proven sound, while dealing with real, albeit mature, themes lyrically.
Now “Asylum” isn’t much of a progression for the band sonically, but in all honesty, the band hasn’t really come close to anything of the sort. In fact, you could even nitpick and say the band regressed going from their electrifying debut “the Sickness” to the eventual follow-up “Believe,” but that’s neither here nor there – really a story for another time actually.
This record is more of the same for Disturbed – a commercially viable melodic powerhouse, overflowing with soaring hooks, chugging riffs and pulse pounding skins, a collection of parts pulled from a blueprint that has sold millions of records worldwide. Dave Draiman is a beast, a vocal giant that fuels the effort, as “Asylum” sees one of his best vocal entries to wax yet, and that is not even to mention his songwriting, which has improved tenfold. Disturbed tackles some sensitive issues here, issues they would not have come near in the past, well, besides religion (see ‘Prayer,’ written by Draiman about a personal conversation between him and God one late night). The band takes on the holocaust (‘Never Again’), global warming (‘Another Way to Die’), lycanthropy (‘the Animal’) and miscarriage (‘My Child’).
What’s so amazing, and at the same time mystifying, is that Disturbed is able to keep going back to the well time and time again, consistently repackaging the same old looks and the same old sound, making it seem new again. “Asylum” is proof of that actuality, and the proof is in the pudding.
Grade: B
Listen to: ‘Asylum’
Email Post
Labels: asylum disturbed reprise records