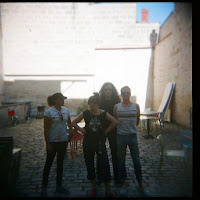 Males is the sixth full length release from Seattle, Washingtonʼs The Intelligence and is their most potent album thus far. For this record Intelligence, main-brain Lars Finberg decided to ditch his usual method of recording all the instruments himself and had his current touring band play on it. The results are as powerful as a punch to the face by Mike Tyson but with the velveteen touch of a dandy fop.

This current line-up of The Intelligence features Lars (of course), Susannah Welbourne, Beren Ekine Huett (Eat Skull) and Chris Woodhouse (Mayyors, FM Knives, Karate Party), who also served as the recordʼs producer. Hopefully this will still be the current line up by the time you read this. The band just returned from one of their many triumphant European tours where they tested the new material from this LP and, according to Lars, these songs made the most hardened Croatian garage punks act like hyperactive teenage girls.

Marrying buzzsaw punk, DIY post-punk, ramshackle garage (as in played by The Fall - NOT the Chesterfield Kings), and pop hooks a plenty, Males is The Intelligenceʼs finest statement to date. This is an album that will live in your memory forever!

The Intelligence dropped "Males" via In The Red Sept. 7.