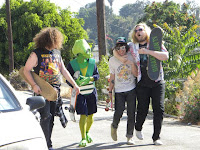 The band released the new music video for their Green Label Sound single "Post Acid" this week. The "Post Acid" video was shot in the Echo Park area of Los Angeles. Acclaimed DIY photographer/filmmaker Patrick O'Dell directed. Patrick O'Dell, who is best known for his short-form documentary series Epicly Later'd, has also directed music videos for Morrissey and Panda Bear. O'Dell's "Post Acid" video features friend and professional skateboarder Kevin "Spanky" Long as the alien who befriends the band and embarks on a raucous, fun-filled day of skateboarding, hanging out, and playing a party gig.

When asked about the concept for the video, Wavves' Nathan Williams said "I'm glad I finally got to fulfill my dream of ripping off the premise of the movie Encino Man... except we replaced the caveman with a skateboarding alien!"

"I love it when a band comes up with something totally bizarre and ambitious rather than shrugging and saying 'I don't know, what do you wanna do?' as they mope around looking cool," O'Dell comments. "I feel like we've almost made one of those fan videos where an anonymous person out there cuts up a movie they like and fits it together with a song they like and uploads it to YouTube. This is one of those videos, but the band just happens to star in the movie."

Wavves streeted "King of the Beach" via Fat Possum Aug. 3.