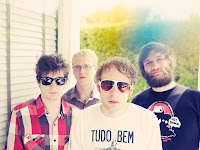 Recorded late last year at Black Dirt Studios in upstate New York, The Black Dirt Sessions is a deeply personal record from Deer Tick and most especially from lead vocalist and songwriter John McCauley. It is the sound of a band coming into its own, finding its voice and pouring its collective heart out. The comparisons that have often been thrust upon McCauley by the press seem to fall away as his own voice comes through more clearly. On songs like "Goodbye, Dear Friend" and "Christ Jesus" which find McCauley alone at the piano, about as naked as you can possibly get on record. The Black Dirt version of "Christ Jesus," which also appeared on War Elephant, manages to be even more devastating than the original.

Clearly, the band is exploring some darker material here (like death, mortality, the existence of God) than they've touched on in the past, and it suits them. Even as the Deer Tick live show has become legendary for its raucous, spontaneous moments, this record serves as proof of the band's incredible musicianship, cohesive nature and most importantly gives us a chance to witness McCauley becoming a fully formed, mature songwriter right in front of our eyes (or ears).

Deer Tick has had an incredible couple of years. Early in 2009 the band had the unlikely support of NBC Nightly News' Brian Williams, who has become one of the leading champions of Deer Tick via his BriTunes music site, alongside critics like David Fricke and Greil Marcus. The band was praised in just about every major music publication, with Rolling Stone going so far as to name them "the country-rock breakthrough of the year." In their hometown of Providence, RI the band has gone beyond hometown hero status to hometown obsession. Deer Tick also became a steady favorite for many of our men and women in uniform, performing for Pentagon TV several times. Unlikely celebs like Rachael Ray and Joge Garcia of LOST have publicly shared their love of Deer Tick. Last Halloween, the band played an entire set of Sex Pistols songs in costume, flawlessly without a single rehearsal. The band played at festivals like Austin City Limits, Newport Folk Festival, Joshua Tree Music Fest, Monolith, Philadelphia Folk Festival, and Coachella, played Brooklyn's Prospect Park and this year will make their debut appearance at Lollapalooza. They've toured with Dr. Dog, Neko Case, Jenny Lewis, Jason Isbell, The Felice Brothers as well as pals like Those Darlins and Dawes. A documentary film about the band, City of Sin, was also completed last year and should see the light of day in 2010. The band also recently contributed the track "Unwed Fathers" to Broken Hearts & Dirty Windows: Songs of John Prine alongside My Morning Jacket, Conor Oberst, Justin Vernon of Bon Iver, The Avett Brothers, etc.