Free Music! Field Music - 'All You'd Ever Need To Say' 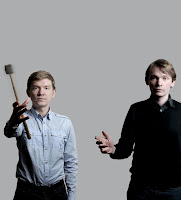 MP3: "All You'd Ever Need To Say" -
http://www.forcefieldpr.com/fieldmusicneedtosay.mp3

Field Music released two acclaimed albums of unpretentious intricate beauty; 2006's self titled debut and 2007's Tones of Town both released on Memphis Industries/Revolver. Shortly after the release of the Tones of Town album Peter and David called time on the band playing their last show with Deerhoof in Leeds in May
2007.

The brothers sited the stifling "indie band" format as the main reason for putting "Field Music as a band" on hiatus and subsequently started working separately, but with a renewed vigour at their 8 Music studio. 2008 saw the release of two solo albums - David's guitar heavy Sea From Shore album under the moniker School of Language and Peter's highly acclaimed murder mystery themed Linn Drum, Fairlight and marimba affair, The Week That Was.

After lugging their marimba around the world for a year as The Week That Was the brothers started writing and recording together in early 2009 with the intention of releasing the results under the name Field Music.

Unknown said…
Thank you for the great review of Roy Orbison's Last Concert. Please email me your address, I would like to send you a Roy Orbison shirt as a thank you. Tanja@orbison.com Tanja Crouch, VP, Roy Orbison Music
September 30, 2010 at 10:02 AM

david beckham said…
Hi everyone!
Today I will share with you top best ringtones in 2018.you will music music, experience the hot tunes.You can refer and see more instructions to download ringtones for your phone.

All ringtones are downloaded for free. To learn more about the latest ringtones, you can visit homepage: https://ringtonesmobile.net/