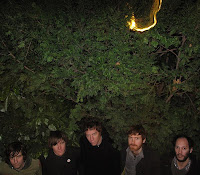 Crystal Stilts burst out of Brooklyn's storied post-punk indie scene in 2008 with a string of releases that culminated in their fantastic debut album Alight Of Night. Deftly combining the spooked 60s Texas psych of 13th Floor Elevators and Red Crayola, the gothic blues/punk howl of Gun Club, the dark, experimental DIYism of early Flying Nun/Xpressway groups and a dash of classic 60s pop by way of early Mary Chain b-sides, Alight Of Night won universal accolades and established the band as first-class purveyors of haunting, atmospheric post-punk pop.

Spring 2009 saw them follow-up with the excellent 7" single of "Love Is A Wave," a live favorite that was backed with the twangy classicism of "Sugar Baby." The band toured the US and Europe, releasing Alight Of Night in the UK to yet more accolades. All the while they were writing new tunes, experimenting with new sounds and planning their next moves.

"Shake The Shackles" is Crystal Stilts' first release since "Love Is A Wave" and is a great snapshot of where the band is now and a taster for their forthcoming album, due early 2011. Driven by echoed guitar strum and droning keys, it's a dexterous update of 60s garage pop that places it alongside late 80s Paisley Underground heroes like Green On Red and later Dream Syndicate, but the song itself is totally timeless, and impossible to place anywhere but firmly in Crystal Stilts' own unique style. On the flip they go darker with the twilight swing of "Magnetic Moon," a bluesy chug that comes on like some lost swamp pop classic, all echo, guitar twang and simple tom 'n' tambourine beat. Great stuff, and exclusive to this single.