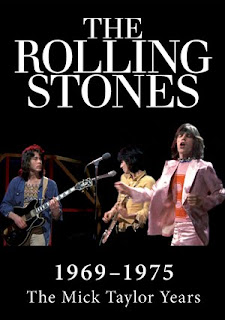 The Rolling Stones
“Rolling Stones: 1969-1975: The Mick Taylor Years”
Throughout the course of a mere six years, former Rolling Stones guitarist Mick Taylor left a lasting impact on not only the band and their music, but their overall legacy as well. After replacing original axeman Brian Jones (who ironically was kicked out of the band by Mick Jagger and Keith Richards for being too drugged-out, talk about calling the pot calling the kettle black), Taylor went onto significantly influence the bands musical path with such seminal releases as “Let It Bleed” (1969), “Sticky Fingers” (1971), “Exile on Main Street” (1972), “Goats Head Soup” (1973), and “It's Only Rock n' Roll” (1974), before leaving the groups ranks shortly after the latter release. This period is widely considered the best of the bands career, and a debt of gratitude is owed to the guitar work of Taylor, a debt that’s partially paid with this DVD, “Rolling Stones: 1969-1975: The Mick Taylor Years.”
The collection of interviewees gathered together for this DVD is actually somewhat impressive, with Robert Greenfield, who wrote at length about the band during their “Exile on Main St.” recording sessions and subsequent tour for Rolling Stone magazine, heading the pack. His stories shed light on the, well, bleak side of the record and its release, including the fact that it wasn’t exactly highly touted by critics at the time, though it is considered by most to be the bands best work. John Mayall, the man credited with finding Taylor and recommending him to Jagger, chimes in, as well as do a whole host of session musicians who played with the band during the “Exile” recording sessions.
The interviews are mixed in with archived footage, including some that’s yet to see a release, including clips and scenes from such heralded unreleased works as “the Stones in the Park,” a TV film of the band's first performance with Taylor in London's Hyde Park in 1969, “Ladies and Gentlemen, The Rolling Stones,” the official concert film from the band's '72 tour, and even from “Cocksucker Blues,” a scrapped ‘official’ concert film about the bands 1972 tour.
And while “Rolling Stones: 1969-1975: The Mick Taylor Years” doesn’t entirely chronicle each and every one of Taylor’s contributions to the band, and even though it goes a pretty sizeable chunk of the DVD without focusing on him and his efforts, or even really mentioning him for that matter, it still ranks as one of the better unauthorized Stones DVD’s you’ll get your hands on today. It’s a borderline essential piece to any Stones advocate’s collection, though you might want to do some homework and have a marginal grasp on your Stones history before viewing.
Grade: B
Email Post
Labels: exile on main st. keith richards mick jagger mick taylor the rolling stones