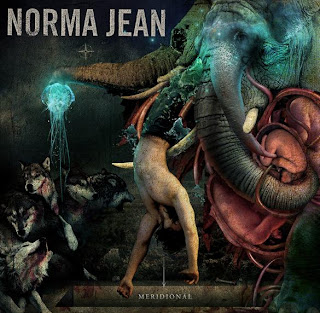 Norma Jean
"Meridional"
Razor & Tie
Thanks to a pretty smart marriage of cavernous reverberations and contemporary progression on their latest, "Meridional," Norma Jean doesn’t lose even a step from their 2008 release, the "Anti-Mother," even though the time spent between releases saw the band find a new home with Razor & Tie Records, having since left Solid State. Not only did the band not lose anything in the switch, it was a seamless transition as it were, a smart decision that apparently made the band a more cohesive unit. After checking out the 13 tracks that is "Meridional," it shouldn’t be too hard to craft an argument regarding this being the bands nest work yet. The album surely has its share of violent outbursts – quite possibly the bands heaviest works dropped on tape – with outings like 'Leaderless and Self Enlisted,' 'the Anthem of the Angry Brides,' and 'Bastardizer,' though "Meridional" expels just as much effort in tempering that trademark aggressive sound with restrained retorts that offer listeners certain moments of clarity with progressive, atmospheric vehicles like 'A Media Friendly Turn for the Worse' and 'Falling From the Sky: Day Seven,' and perhaps to a lesser extent 'Deathbed Atheist.' Well, the intro of that song if nothing else. "Meridional" isn’t quite the record you’d expect from a band that has garnered comparisons to mountainous giants like Isis and Neurosis, but it is a logical, albeit successful, next step for a band that’s looking to break the metalcore mold. (www.myspace.com/normajean)
Grade: A
Go Download: 'The Anthem of the Angry Brides'
Email Post