Reviewed! Impending Doom - "There Will Be Violence" 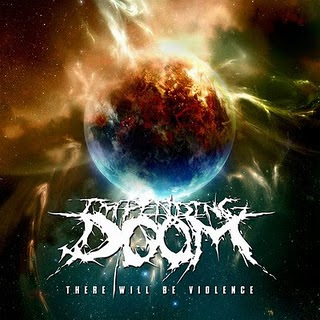 Impending Doom
"There Will Be Violence"
Facedown
Impending Doom has steadily progressed and gotten better sounding with each record they’ve streeted thus far, from 2007’s "Nailed. Dead. Risen." to 2009’s "the Serpent Servant." The band has yet to drop a clunker. And you’ll have to wait another album cycle for that to happen, as "There Will Be Violence" surely doesn’t classify as that afore mentioned clunker. As they (wisely) did with "the Serpent Servant," Impending Doom again turned the keys over to As I Lay Dying’s Tim Lambesis to handle the production, and for that simple fact, they’ve never sounded better. And not only does Lambesis produce, he also steps out from behind the mixing board and up to the microphone to lend his talents to 'Orphans,' which is one of the best songs on the album. But not to be outdone, the Acacia Strain’s Vincent Bennett helps out vocally on the single 'the Great Fear,' a track that only strengthens "There Will Be Violence" on the whole. 'Peace Illusion' might be the album’s single best song, but that’s better left to your own interpretation, because there’s a lot of excellent material to choose from here. The bands instrumental rendezvous’ (‘Love Has Risen,’ ‘Hell Breaks Loose’) are ultimately skip-worthy, though they do succeed in showcasing what we should know by now – Impending Doom are a group of tremendously adept musicians. "There Will Be Violence" is a rock solid listen from start to finish, which makes it hard to say this isn’t the bands best album to date. (www.myspace.com/impendingdoom)
Grade: A
Go Download: 'Orphans'
Email Post