Reviewed! Filter - "The Trouble With Angels" 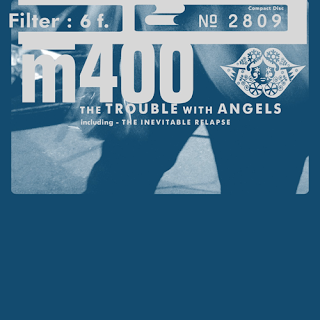 Filter
“The Trouble with Angels”
Rocket Science
From the onset of “the Trouble with Angels,” the fifth studio release in fifteen years from Filter, the band returns to a sound perhaps long forgotten, one that blends towering drums, churning, down-tuned guitars and chugging riffing, a sound that some fans of the band might not remember. Those fans whose interest has waned in the band throughout the years due in large part to soft, pillow-y radio mainstays like ‘Take a Picture’ should perk up and heed the call of the opening few stages of the record, outings like ‘the Inevitable Relapse,’ ‘Drug Boy’ and ‘Absentee Father’ that sound closer to “Short Bus” era Filter circa 1995 than most anything else they’ve released, though as is the case of most all great rock records, it isn’t quite so one dimensional in terms of sound.
“The Trouble with Angels” counteracts the gritty, industrial tinged hard rock that mostly runs rampant throughout with moments more tempered, beautiful movements that offer some clarity (‘No Re-Entry,’ ‘Fades Like a Photograph (Dead Angel)’), instances of elation that allow the band to wander a little bit and flex their melodic muscles, something they’ve been charged with doing a bit too much of in the past, though here it isn’t as much “Title of Record” as it is “the Amalgamut.” If these portions of the record do nothing else, they showcase the sheer fact that Richard Patrick has not lost a step in the melodic rock arena, and that he can still lift a song on his shoulders vocally if need be.
‘Catch a Falling Knife’ and ‘the Trouble with Angels’ are two of the more intriguing cuts. They are somewhat a middle ground between the overall sonic makeup of “the Trouble with Angels,” presenting something of a modern-day, “Diamond Eyes” Deftones-type sound. Toss in the latter track ‘Clouds,’ and you have a trio of worthy listens that work perfectly to add both intrigue and heft to the back end of the record, something not many bands can say they have done.
To say that “The Trouble with Angels” is an overwhelmingly pleasant surprise wouldn’t so much be an understatement. And to that point, to say that this is one of the bands strongest contributions thus far in their career might not be that much an understatement either. As a matter of fact, this record is an excellent collection of rock tracks, one that could find itself in conversations come years’ end.
Grade: A
Listen to: ‘Drug Boy’
Email Post
Labels: filter richard patrick the trouble with angels