Reviewed! The Doors - "When You're Strange" DVD 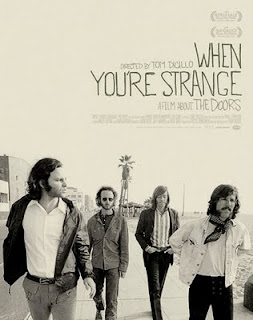 The Doors
“When You’re Strange”
Eagle Rock Ent.
A documentary about the Doors is nothing new. One made with the full cooperation of the three surviving original members - Ray Manzarek, John Densmore, and Robby Krieger - however is. “When You’re Strange” is such a documentary, one that is even narrated by actor Johnny Depp, and honestly, Depp doesn’t just sign on to any piece of garage (recent remake of Alice in Wonderland notwithstanding, or just go ahead and input your favorite Depp lowlight here).
This doc houses enough footage of venerable frontman Jim Morrison to sell the work itself, though most of it is a literal train wreck – you can’t help but stare and awe at Morrison and just how self-destructive he was until the tape started rolling, when he miraculously pulled himself together for quality takes. It’s surely a sight to behold. “When You’re Strange” shows Morrison drunk, incoherent, out-of-control and most of all uncensored, and oft-succeeds where many other Doors docs have ultimately failed – showing the ‘Lizard King’ for what he really was, a spectacle, iconic figurehead, and literal ticking time bomb, ready to implode at a moments notice.
This movie also does a good job showcasing the collective cool of Morrison’s bandmates, plugging along song after song as their lead singer would wildly rant and rave onstage, or just pass out during a song. Most of this footage will be seen for the first time, almost all of it considerably refurbished and cleaned up.
“When You’re Strange” hits all of the bands historic stops, including how the band met, show after show at LA’s Whiskey A Go-Go, and Morrison being arrested for indecent exposure. The movie, which saw a brief, limited stint in theatres, shows the bands meteoric rise and tumultuous fall, a fall from rock music’s grace that hinged upon the shoulders of one man, Jim Morrison. A number of scenes chronicle Morrison’s latter days, showing him hitchhiking and driving through the desert while stopping at various service stations and the like along the way, reportedly taken from a home movie shot by Morrison himself. As they say, you live by the sword, you die by the sword, and the old adage couldn’t ring truer when applying it to this band.
As for extras, Morrison’s father, retired Naval Admiral George C. Morrison, is interviewed for the first time ever, along with Morrison’s sister.
It might be somewhat of a stretch to say the “When You’re Strange” is a must own for Doors fans, though it shouldn’t be so much to say it is a must-see. As was probably the case with many of the bands latter day concerts, Morrison’s antics alone are well worth the price of admission.
Grade: A
Email Post