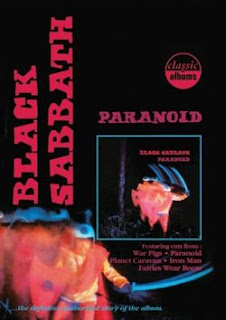 Black Sabbath
“Classic Album DVD: Black Sabbath's Paranoid”
Eagle Rock Ent.
If you’re reading this, then chances are you already know about Black Sabbath’s seminal, legendary release “Paranoid,” and odds are, again, that you know just how very, very good that record is. Well, what you might not know is some of the back story of the record, including how the record itself came about, how members of the band came up with certain parts and lyrical inspirations. Well, now those questions can be answered, as Eagle Rock Entertainment has hit a towering home run with “Classic Album DVD: Black Sabbath's Paranoid.”
Suffice to say, this DVD is a must for Sabbath fans, Ozzy Osbourne fans and Heaven & Hell fans. Basically if you are interested in any facet or offshoot of Black Sabbath, you should own this DVD. It features interviews with all original four members of the band – singer Ozzy Osbourne, guitarist Toni Iommi, bassist Geezer Butler and drummer Bill Ward – as they talk about everything you’d want to know about “Paranoid.” They discuss how they came together initially and thusly crafted their sound, to how Sabbath, mainly Ozzy and Iommi, would come up with certain riffs.
"If I couldn't come up with a melody to what Tony had, I'd sing the riff,” Osbourne said.
This DVD doesn’t just focus on the music. Iommi explains how he lost the tips of two of his fingers in a work-related accident and how his then boss urged him to continue playing guitar by giving him a Django Reinhardt record. For those that may not know, Reinhardt continued to perform as an accomplished jazz guitarist despite mangling his hand. Its stories like that - in-depth, behind-the-scenes information you’ll only hear and see on “Classic Album DVD: Black Sabbath's Paranoid.” You’ll feel privileged to hear these stories, ones that make you feel like you were there in 1970 when the band were recording “Paranoid.”
The voices of all members are heard here. Soft spoken Geezer Butler takes the time to set the record straight regarding the fact that most critics would lead you to believe that Sabbath songs are satanic, or the group themselves were Satanists.
"I was into learning about the astral plane. It was all about the future of the world. I was really into pollution. There were a lot of things going wrong in the world and nobody was saying anything about it.”
Jim Simpson, the bands original manager, shares stories about early Sabbath gigs and the problems they incurred performing them, original engineer Tom Allom offers candid input on each song off the record. And speaking of, “Classic Album DVD: Black Sabbath's Paranoid” features a track-by-track analysis of the record.
A highlight section of the DVD sees each member of the band performing intimately, playing along to their respective parts of the albums songs. It is here that the members discuss how parts were written, as well as where they came from and how they came to be in the first place. Stunning is a better word to describe it, a must-see for any and all fans of Black Sabbath.
“Classic Album DVD: Black Sabbath's Paranoid” is a tremendous offering, and really a DVD that any hard rock/metal fan should take time to see.
Grade: A
Email Post
Labels: black sabbath dvd reviews ozzy osbourne paranoid