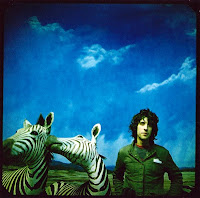 For the last 5 years, living in a car, booking his own shows, producing all his own music, Paleo has become something of a mantlepiece in the American house show circuit. His tour history is a database for kindred spirits: over 700 shows across the US, about 150 a year since 2005. Daytrotter's Sean Moeller playfully crowned him their Poet Laureate in 2007. And while his self-released first record, Misery, Missouri (2005) earned him high marks from a number of sources, Paleo gathered most of his notoriety through his songwriting mecca, The Song Diary. Easter Day 2006 to Tax Day 2007, he wrote and recorded 365 songs consecutively. Paste called it "a streetfight of freakish prolificacy." Other notable credits include soundtrack work alongside Okkervil River for the feature film In Search Of A Midnight Kiss (2007), winner of the John Cassavetes Award at the 2009 Independent Spirit Awards, and producing These United States' psychotropic debut record, A Picture of The Three Of Us At The Gate To The Garden Of Eden (2008), on which he played the majority of the instruments. In the interviews that followed the Diary, the first thing people wanted to know was what next? Speaking with Tape Op in 2008, the wanderer conceded, "I want to make a great record. That's still the gold star in this business." A View Of The Sky is his third effort. The songs contained therein, vivid scrawls of a remarkable mind, are the first compositions he made following his marathon year; it is also Paleo's first collaboration with Partisan Records out of Brooklyn, NY-- home to Deer Tick, JBM, Mountain Man, and more.

Paleo's "A View of the Sky" releases via Partisan Sept. 28.