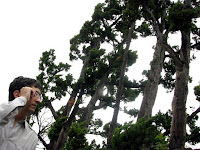 "It's a simulacrum of what the band of my dreams sounds like," says Brad Laner, the angled summer light pouring into his cozy home studio. LPs line the walls; Yes is on the turntable. A green lawn stretches outside. An easel, six-year-old sized, sits next to a guitar. A computer monitor glows. A dog taps down the hallway. "Natural Selections is unashamedly all artifice, all pretend, all construction. Now, for me, it's all about making records in a painstakingly slow fashion, laboring over five seconds of music at a time for months on end only to trash it and start all over again ad infinitum or until I'm happy. In between packing lunches."

The pop music of Brad Laner (a relatively new concept in its own right) has a respect for the inevitable tick-tock of time. Crafted in a sprawling mid-century house between multi-centuries of California mountains -- with family in the next room over -- there's proven stability underfoot. But as wildfires desaturated the west coast sky last year, as the earth caught up to man, Natural Selections was born. Brad Laner's second solo album is an evolution; the first adrenaline-stirring drum hit of "Eyes Close" gets picked up by the lava flow of voice upon voice upon voice (all Brad's). The guitar climbs like kudzu. The beat kicks in. Eyes open. And you're back on Sunset Boulevard.

Steaming Coils. Savage Republic. Medicine. Electric Company. Amnesia. Lusk. The Internal Tulips. The house that Brad Laner built spans twenty-five years and as many LPs, paving the way for shoegaze in North America and sewing the seeds of electronica in the median of that same dusty highway. His label resumé includes the likes of New Alliance (The Minutemen's imprint), Creation, Def American, Island, Tigerbeat6, Planet Mu, and Astralwerks. In 2007, Brad Laner joined Hometapes and released his first true solo album under his own name. Born alongside his son, Julian, this "debut" was a hand-built bridge from one life to the next. Years of touring the world and balancing the machinations of band life provided the foundation for both looking back and looking beyond. A child provided a new lens. The light refracted: Neighbor Singing, a ten-track "sun-splattered psych-popper" (according to Stereogum), co-produced by Thom Monahan (of Vetiver and Brightblack fame), featuring tracks like "June Gloom" and "Find Out" that threatened to bring summer to the coldest climes and the electric-guitar-susceptible to their knees.

"I would like to hereby apologize to anybody who wishes to see my stuff played live. I would too actually, but only if I got to watch from a safe distance." Echoing the history of voices that've run counter to the gospel of the music industrial complex (The Beatles, Brian Eno, XTC, etc.), Brad Laner makes records to be experienced as just that: records. "My albums always have a distinct side one and side two by design because that's the language I grew up with. What else could you possibly need aside from great cover art?"

In the case of Natural Selections, Julian Laner, also an album contributor on "Vicky," comprises the striking cover image. Brad himself caught this family portrait-cum-primitive study in a hillside park in their neighborhood. Brad, the elder Laner, appears elsewhere in the record's packaging, walking the same path as Julian, viewing the expanse with a time-traveler's gaze. It's in that moment, and in moments across Natural Selections, where the mundane turns extraordinary, where a song becomes a brilliant event, and where a memory actually turns out to be a precognition. Brad Laner makes records that double as realizations. Realizations with really, really killer guitar solos.