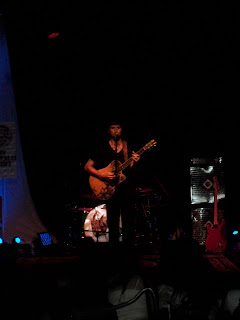 Chris Nathan Does Right By Hometown at the Tralf – 7/29/10
From recording songs on an old four track in his bedroom at his parent’s house in Angola to fronting rock group Woke up in Vegas to Southern rock crooner, Chris Nathan has always tackled any of his numerous musical projects head on. His talents have since taken him to one of the most prominent music capitals in the world – Nashville – though he hasn’t yet forgotten his roots, returning to them recently as he performed at the Tralf, a show that garnered much fanfare, causing it to be the venues most talked about show in recent memory. Nathan surely responded in kind, giving everything he had to those in attendance, a kind of all out performance you don’t see too often nowadays.
Nathan has long had an intriguing, beguiling even, show aesthetic, as not only is he an uber-talented rock frontman, but perhaps an even more talented acoustic singer/songwriter, something he showed off at the beginning of the nights festivities, entering stage left all by his lonesome, getting things underway with ‘Spin’ and ‘Saving Savannah,’ before welcoming the rest of his band on stage halfway through ‘Moving On Top of the World.’ From there he broke into crowd favorites like ‘Bonnie and Clyde,’ ‘Sugarcane’ and ‘Words,’ before wowing the crowd with a dead on Southern rock rendition of Warren G’s classic ‘Regulators.’ Now, as someone who has known Chris for most of my life, you’d think this type of stuff would have grown stale throughout the years, but it is still exciting to see fire over cover tunes like he did when he was performing as a teenager. And it was nice to see that some things haven’t changed, like Chris’ dan 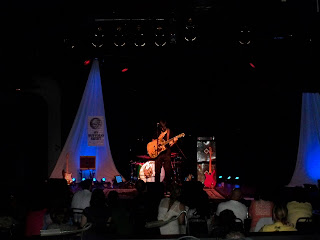 cing abilities. If you don’t know all that much about Nathan, he is a big, big fan of old school rap and R&B, something Tralf crowd-goers learned in spades this night. Chris continued his whirlwind of effervescence with ‘Sunshine and Alcohol,’ before slowing the pace with the plodding, calculating, and very well-written mind you, ‘Livin’ a Lie,’ a song aimed directly at the music industry, namely big record labels. Nathan and the boys again showed the crowd they have OG chops with a pinpoint cover of 2Pac and Dr. Dre’s timeless ‘California Love’ which ended that particular portion of the set. The crowd was literally dancing – in the aisles, at the tables and even at the bar.
More acoustic tunes were next, with Chris giving his band another breather, returning to the stage solo for tremendous offerings such as ‘Happy,’ and an abbreviated cover medley of Jay-Z’s ‘Empire State of Mind’ and Blackstreet’s ‘No Diggity.’ Usually Nathan’s cover medleys consist of TLC’s ‘No Scrubs’ (which he offered up a bit acapella), ‘California Love’ and ‘Regulators,’ though he opted to perform the latter two with his band instead. He even took the time to appease us old-schoolers with a bit of the lost track ‘Angelwater,’ and if you know this song, you obviously were friends with Chris in high school.
The band was welcomed back onstage for more hi-jinx, including guitar solos; bass solos and drum solos, as well as some sweet freestyle rhymes from Nathan. When the house lights came up, the crowd wanted more, though due to contractu 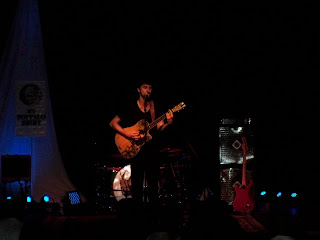 al obligations and time constraints, Nathan could not deliver, but he took the party to the Pearl Street Bar immediately following.
It was a great show, one in which you just know people in attendance got their money’s worth, and I’m sure Nathan wouldn’t have it any other way. Chris, as a good friend and a fan, please come back home real soon. We’d love to have you.
Email Post