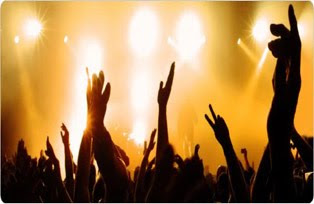 This year I thought I was ready. I had a full schedule and a list of preferred bands written out, and Warped still managed to swerve me, effectively tossing a monkey wrench into the works of my day as it were. The ever-rotating merry-go-round of performance times and stages that is the Warped Tour, Punk Rock venerable Summer Camp, was able to dupe me for another year, because you see, three of the bands I wanted to see the most, Reel Big Fish, All-American Rejects and Motion City Soundtrack, play VERY early on in the day, much to my dismay honestly. I had both bands near the end of the day in my head, and this is where Warped got me – I let my guard down and Warped made me pay. Well, not really pay so much because I had about a million other bands available for aural consumption, at least 15 of which made my ‘Must See’ chart.

Anyways, enough of my self-wallowing. I should’ve been more prepared, right?

Every time I attend a Warped Tour, I always think to myself, why doesn’t every single person go to this show? I mean, honestly, if you go to one show during the Summer, it should be Warped because you’re getting the most out of your hard earned dollar – an all-day festival with eight stages and 50+ bands – you cant go wrong, not to mention a plethora of non-music related activates to keep you entertained. This years Warped offered a lot in things to do – karaoke, dance contests, non-band merch booths, dunk tank, beer, etc. The dunk tank was especially sweet because not only did it benefit charity, but you also had the chance to dunk musicians. I waited in line for a little bit to get my shot at dunking Jonny Craig from Emarosa, but couldn’t wait as long as the line was. And speaking of lines, the one to take a photo with Andrew WK was horrifically long. That guy knows how to market himself, even if the majority of people in attendance think he’s a running joke. But joke or not, when he performed, you couldn’t move – it was packed to the gills. 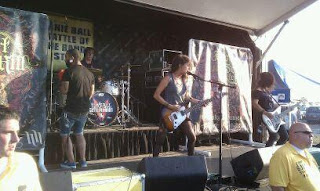 And speaking of performances, I caught my share of those too. When I walked in I was surprised to see Mayday Parade playing on the ever-tiny Ernie Ball stage to thousands of kids packed like sardines into the parking lot venue, and was also pleasantly surprised to see the bands not close their sit with the uber-contagious hit single, ‘Kids in Love.’ They looked good, and were brilliant in making the transition back to a stage that small from the larger venue stages they currently roll onto night in and night out. From there I made my way to the bar to grab a pop, and then caught a Confide’s set, which was one of the surprises on the day for me. Talk about a band playing to their strengths. I haven’t heard that many breakdowns since It Dies Today was on the tour a few years back. These guys were on my list to catch and I was glad I did – swirling hair and guitars, circle pits and breakdown after glorious breakdown made up their set, really a set that left me hungry for more metal. So I did, catching sets from Emarosa and Every Time I Die. Emarosa was good time indeed, though their set was short, but they made the best of things. They did a great job actually in making the crowd interested and getting them involved in the show, but not as good a job as Keith Buckley and Every Time I Die did with their (trademark pending) ‘crawl of death.’ Buckley had the crowd get on their hands and knees and move as slow as possible to get to each other when their song ’Floater’ kicked in, making it a better see than the ‘wall of death’ you see everywhere else. According to ETID, ‘no one is doing this but us.’ What a way to welcome yourself back home. Sum 41 was by and far the biggest draw of the day, myself included, as they put on a clinic of a 30 minute set, packed tightly with radio singles and fan favorites, but the real icing on the cake was their cover the Rolling Stones classic ‘Paint It Black.’ They’ve been gone for some time, but the crowd welcomed them back with open arms by singing just about every word to every song. From there on in I caught AM Taxi’s set, and they probably surprised me the most because I didn’t know much about them going in. Their street punk was a nice change from the powerpop & metalcore that nearly ruled the day, and it was refreshing for sure. The band seemed blur collar and honest, and if you’re into bands like the Gaslight Anthem and the Street Dogs, put these guys on your ‘To-Do list for sure. Another highlight for me was catching After Midnight Project acoustic with about 4 other people – I wasn’t able to catch their set but I was happy I caught this. It was excellent, truly acoustic and truly unplugged. If you don’t know who these guys are, you need to hear their “Let’s Build Something to Break” album right about now. Along the way I also caught sets from Closure in Moscow, which was ultimately forgettable, and the Riverboat Gamblers, who were enjoyable live though their music wasn’t anything to write home about – good stage presence, lacking sonic presence. I hung around for Eyes Set to Kill, the band that ultimately ‘headlined’ the Ernie Ball stage, and it was well, well, well worth my time. This band was the highlight of my day, proving Warped saved the best for last on this day. I wasn’t too sure about new screamer Justin when I listened to “Broken Frames,” the band’s latest record, but he definitely won me over in a live setting. The band was excellent, effortlessly emptying their respective catalog, which resulted in the crowd chanting for an encore, which didn’t happen, because, c’mon, it’s Warped Tour. 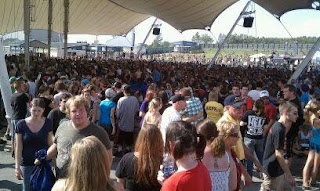 I also took the time and money to pick up a few magazine subscriptions as well, to Alternative Press, who, of course, raised their annual prices $8, and Substream, which was a slightly better deal since I got a free mag, a shirt and a free ukulele song from the guy at the booth personalized to me. I didn’t want to tell him at the time, but I would’ve probably paid $10 for the song alone. Someone walking by thought he was Christofer Ingle, aka Never Shout Never, which made me laugh hysterically. The load of freebies usually found around Warped was lighter this year, though most albums being sold were a user-friendly $5, which no one should be complaining about.

Bottomline, Warped is always a great time, and this year’s edition was no exception. Kind of makes me wish Warped did two Buffalo dates.
Email Post