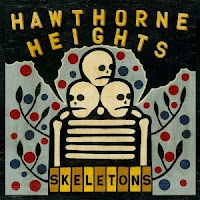 Hawthorne Heights
"Skeletons"
Wind-Up
At the same time, Hawthorne Heights’ latest effort "Skeletons" is both the bands most reclaimed work they’ve released yet, and their most massive. Most of the bands trademark raw, angsty aggression has been replaced with smart songwriting that obviously draws inspiration from the deaths, tragedies and courtroom battles that litter the bands sorted past (the unfortunate passing of both guitarist Casey Calvert and singer JT Woodruff’s mother, and legal issues and lawsuit with former label Victory). It’s that renewed sense of attentive songwriting that has Hawthorne Heights a more mature band, the most they’ve been to date, and "Skeletons," the literal product of such, couldn’t be better for it. New screamer Micah Carli does an ample job of replacing Calvert, though his vocal workload has been noticeably scaled back, and the conscious decision to not replace Calvert seems to be paying off. Yes, the band does lose that patented shredding three guitar attack, though these introspectively written songs are flawlessly executed nevertheless.
There’s a quality mix on "Skeletons," one sure to please each fan, new or old, as the band delivers with some post-screamo, forceful guitar driven tunes ('Nervous Breakdown,' 'Broken Man,' 'Unforgiveable'), but the songs that showcase the bands growth as musicians, songwriters, and most of all, humans, overshadow almost everything else ('Gravestones,' 'Picket Fences,' 'Boy').
It probably isn’t much of a stretch to say that "Skeletons" is the bands best record and the crowning achievement in their career thus far.
Email Post