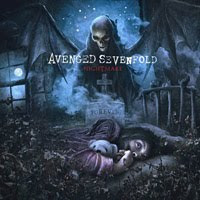 Avenged Sevenfold
“Nightmare”
Warner Bros.
Avenged Sevenfold are warriors in every sense of the word – sonically, physically, but perhaps most of all, mentally. Being able to slog through the dirge and despair of suddenly and tragically losing one of their own – drummer Jimmy ‘the Rev’ Sullivan – has to take a toll like some may not be able to understand, but to come out on the other end of things with an album like their latest, and fifth, studio release, “Nightmare,” takes fortitude. Think of this album as the supreme gut check for AX7, one they breeze through with ease.
The band did the right thing moving forward with “Nightmare.” The Rev recorded some of the material before his passing, and his presence is as much felt on this record than that of his legendary replacement, Dream Theater’s Mike Portnoy, aka one of the best drummers ever to pick up a pair of sticks in the last few decades. Now, the term ‘replacement’ is used loosely as it is unsure as to just how much Portnoy will contribute in the future. Hell, singer M. Shadows even referred to him a ‘rebound’ drummer not too long ago. But one fact remains true – Portnoy was the Rev’s favorite drummer growing up, so who better to carry on his legacy as it were. Surely the Rev could be proud. Now, in terms of execution, we’re talking about Mike freaking Portnoy here. While he isn’t as overtly smooth and decisively slick as the Rev when it comes to fills and transitions, the sheer, unmatched skill is still there, so certain concessions can be made.
“Nightmare” borrows from the same formulaic pop-metal approach as most every other AX7 release – potent buildups cascading into deafening, double bass led charges, culminating in uber-melodic choruses, then simply rinse and repeat. But this record is perfectly crafted with such passionate structures, and it’s those bombastic melodic instances that give “Nightmare” a certain heft. Unlike prior releases from the band, there is more here to sink your teeth into than mere slick production. This album comes across with a heavy heart at times, but it equals those heart-rending moments with enough intensity and hostility so as to not alienate any listener. In other words, while “Nightmare” is definitely the bands most emotionally charged affair to date, it still packs a left hook that will knock you on your ass if you’re not careful. “Nightmare” deftly tows the line between passion and aggression, interspersing endearing tracks likes ‘Buried Alive,’ ‘So Far Away’ and ‘Victim’ with heavy-hitting riff-fests like the title track, ‘Natural Born Killer’ and ‘God Hates Us.’ On the other hand though, ‘Fiction’ is a song that doesn’t really have a place on “Nightmare,” or deserve one for that matter. Hell, the song doesn’t belong on any AX7 release to be honest. But we can afford the band one mulligan now, can’t we?
It went without saying that “Nightmare” had to be one of Avenged Sevenfold’s shining moments, and shining moments they delivered here in spades. This is a fitting remembrance of their own – a true way to honor the Rev’s memory.
Grade: A
Listen to: ‘God Hates Us’
Email Post