The Bell Curve (A Division of the Learning Curve): Tristan Clopet - "The Purple EP" 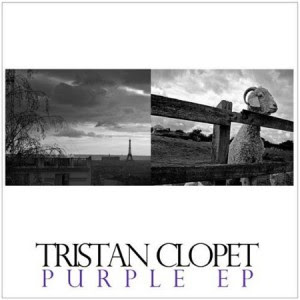 File Under: Blues/Funk/Jazz/Rock Fusion
Tristan Clopet – “the Purple EP” (Sussex Recordings): What’s truly amazing about Tristan Clopet’s “the Purple EP” is its far reaching spectrum of sound, and the fact the band so seamlessly incorporates everything together, pulling the reigns tight so to speak, throughout this genre-bending affair. It’s a sneaky, but silky smooth combination of blues, jazz, pop, rock and funk that’s seemingly avoids labels and classification like the plague through minute-after-minute explosions of sound. But since we live in a world of labels (it’s better not to fight it), “the Purple EP” probably lands somewhere in-between funk and blues-tinged rock, towing the line between the two via herky-jerky, jilted guitar licks, reflexive bass patterns and riffs, and an over-the-top vocal performance that nearly steals the show at every turn. The boastful and confident ‘Proximity Bomb’ gets things underway in melodious fashion, and while most of the EP continues to tread this potent, heady type of water (‘Superficiality is a Sin,’ ‘Ethereal Evidence’), the bands efficient rendezvous with clean, hook driven pop-rock (‘So Alive,’ ‘Love and a Question’) give the record a rounded, more complete feel, while adding some depth as well. The

album, and the band more appropriately for that matter, possesses a certain air of swagger, one that seems to at times come across as somewhat subdued, though it remains consistent and ever-prevalent. It’s surprising that, even at a mere six song tilt, that Clopet and his group of merry men could captivate with such ease, and it’s that captivating persona that the album is imbued with that makes this EP, now mind you, just a six song taste, an appetizer if you will, one of the better unsigned, under-the-radar releases that 2010 has graced us with yet. (http://www.tristanclopet.com/)
Grade: A
Go Download: ‘Proximity Bomb’
Email Post